From 2002 through early last year, the Pentagon conducted 11 flight tests of the nation’s homeland missile defense system. In... 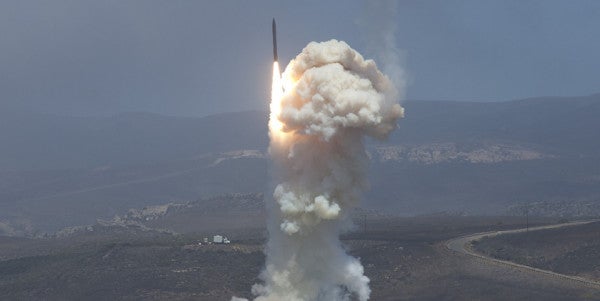 In the carefully scripted exercises, interceptors of the Ground-based Midcourse Defense system, or GMD, were launched from underground silos to pursue mock enemy warheads high above the Pacific.

The interceptors failed to destroy their targets in six of the 11 tests — a record that has prompted independent experts to conclude the system cannot be relied on to foil a nuclear strike by North Korea or Iran.

Yet over that same timespan, Boeing Co., the Pentagon’s prime contractor for GMD, collected nearly $2 billion in performance bonuses for a job well done.

The Pentagon paid Boeing more than $21 billion total for managing the system during that period.

A ground-based interceptor lifts off from Vandenberg Air Force Base.

A Times investigation also found that the criteria for the yearly bonuses were changed at some point to de-emphasize the importance of test results that demonstrate the system’s ability to intercept and destroy incoming warheads.

Early on, Boeing’s contract specified that bonuses would be based primarily on “hit to kill success” in flight tests. In later years, the words “hit to kill” were removed in favor of more generally phrased benchmarks, contract documents show.

L. David Montague, co-chair of a National Academy of Sciences panel that documented shortcomings with GMD, called the $2 billion in bonuses “mind-boggling,” given the system’s performance.

Montague, a former president of missile systems for Lockheed Corp., said the bonuses suggest that the Missile Defense Agency, the arm of the Pentagon that oversees GMD, is a “rogue organization” in need of strict supervision.

The cumulative total of bonuses paid to Boeing has not been made public before. The Times obtained details about the payments through a lawsuit it filed against the Defense Department under the Freedom of Information Act.

A spokesman for the missile agency, Chris Johnson, said that despite the GMD system’s record in flight tests, Boeing had “earned” its bonuses “based on the criteria specified in the contract.” He said the payments “complied with all appropriate acquisition regulations.”

“These types of contracts allow regular and consistent evaluation by the government, and fees are paid only when companies meet clearly defined targets,” Johnson said in an emailed statement.

A spokesman for Boeing, Dexter Q. Henson, referred questions about the bonuses to the missile agency while defending the company’s work on GMD.

Boeing “has met contractual requirements and a variety of incentives across a wide range of program objectives,” Henson said by email.

“As the lead contractor, we have partnered with the Missile Defense Agency in the development and operation of the only homeland defense system that can defeat long range missile attacks,” he said.

The GMD system, which became operational in 2004, is intended to thwart a “limited” nuclear strike by a non-superpower. It has cost taxpayers more than $40 billion to date.

In the event of an attack, interceptors at Vandenberg Air Force Base in Santa Barbara County, Calif., and Fort Greely, Alaska, would burst from their silos and begin a fiery ascent toward the upper atmosphere.

The interceptors are multistage rockets, each with a 5-foot-long “kill vehicle” at its tip. The kill vehicle is designed to separate from its rocket in space, fly independently at 4 miles per second and crash into an enemy warhead.

GMD’s roots go back to the Clinton administration, when concern began to mount over the spread of ballistic missile technology. In 2002, President George W. Bush ordered “an initial set of missile defense capabilities” to be put in place within two years.

The Pentagon’s own Operational Test and Evaluation office has documented serious deficiencies in the system. So have other government agencies and independent experts.

In a report in February, the Government Accountability Office, a nonpartisan investigative arm of Congress, said the system’s performance in tests has been “insufficient to demonstrate that an operationally useful defense capability exists.”

The test failures are unsettling given that the exercises are meticulously orchestrated. Personnel operating the GMD system know ahead of time approximately when the targets will be launched and from where, as well their expected speed and trajectory — information they would not have in an actual attack.

Given the system’s weaknesses, four or five interceptors would have to be launched for each incoming enemy warhead, according to current and former officials familiar with the missile agency’s projections.

As a result, the system’s arsenal of 30 operational interceptors — four at Vandenberg and 26 at Fort Greely — could be quickly depleted by an attack with multiple missiles.

A study by three physicists with expertise in missile defense, released in July by the Union of Concerned Scientists, concluded that “the GMD system is simply unable to protect the U.S. public.”

The Times asked the Missile Defense Agency in March 2014 for information on bonuses paid to GMD contractors. Boeing objected to release of the data, and the agency denied the newspaper’s request, saying disclosure might reveal “trade secrets and commercial or financial data.”

The Times then sued in federal court last year, asserting that the public had a right to know about the payments. The government’s lawyers later agreed to release the information if Boeing would not intervene in the litigation “or otherwise take steps to prevent disclosure.”

Boeing eventually acquiesced, and the Defense Department settled the suit with a single-page letter listing the sum total of bonuses paid to Boeing from Dec. 31, 2001, to March 1, 2015.

The government also agreed to pay $15,000 to cover the Times’ legal costs.

The missile agency’s chief of staff, David P. Bagnati, made the initial decision to withhold the bonus data, according to a 2014 email from the Pentagon’s Freedom of Information office.

Johnson, the agency spokesman, said this week that Bagnati “made the determination on the advice of agency legal counsel” and would have no further comment.

Boeing holds two contracts to manage GMD. Under their terms, the company is reimbursed for its direct costs in overseeing the system and for some of its indirect costs, such as executive salaries and other overhead.

The bonuses come on top of that and can account for all or a significant part of a contractor’s profit.

One of Boeing’s GMD contracts also provides a 3 percent base fee, independent of any bonuses, for some aspects of the work, according to the missile agency.

Under the contracts, bonuses are awarded annually and can be up to 100 percent of specified pools of money.

The Defense Department letter that settled the Times’ lawsuit said the Boeing bonuses fell into three categories. Ninety-five percent of the total sum was designated as “award fees.” The rest was described as “incentive cost” fees and “incentive performance” fees.

The precise criteria for bonuses could not be obtained for each of the relevant years. However, documents on file with the Defense and Treasury departments show that the missile agency at some point altered a central criterion.

At issue was what would make a flight test count as successful for bonus purposes. Boeing’s prime contract dated Jan. 1, 2001, states that “the primary performance criteria” were whether the interceptor destroyed its target during the test — an outcome described as “HTK success.” (HTK is short for “hit to kill.”)

Later contract documents, dated August 2011, list various bonus criteria related to preparing for and carrying out the next scheduled flight test. Successful “mission execution” was worth 30 percent of the award fee pool. But actually destroying the target — “hit to kill” —was no longer specified.

Asked for an explanation, Johnson, the agency spokesman, said:

“In recent contract terms, the words ‘hit-to-kill’ have been changed to support the more detailed documented objectives of each respective flight test. For intercept flight tests conducted under the current design and sustainment contract, a successful intercept remains a key performance objective.”

In 2010, the missile agency granted Boeing a contract extension worth more than $1 billion.

The Defense Department’s inspector general later raised questions about the extension — including bonus payments — saying that agency officials lost an opportunity to save millions of dollars by failing to wait for an audit they had requested.

The controversy centered on the GMD “Core Completion” contract. (The inspector general’s report, released in 2014, did not name Boeing, but other records show that the company held this contract.)

According to the report, the missile agency asked the Defense Contract Audit Agency to scrutinize the contractor’s proposed costs and other terms. The audit was due Feb. 15, 2010, but the auditors asked for an additional month, the report said.

Yet the missile agency signed the contract extension March 10, 2010 — five days before the auditors were to deliver their findings.

The inspector general concluded that if agency officials had waited to see the audit, they “could have negotiated a significantly lower contract value and saved the government millions of dollars in reduced fees” — a reference to bonuses, which are based on the total contract value.

Johnson said officials chose not to wait “because we had sufficient data to reach a determination of a fair and reasonable price for the contract.”

He added that his agency “has incorporated several substantial changes to our procedures” to make better use of future audits.

The missile agency and its lead contractors have sought to put a positive spin on the system’s performance. This year, after a flight test on Jan. 28, the agency and several contractors, including Boeing, issued news releases declaring the test a success.

In fact, as the Times reported July 6, a thruster stopped working during the exercise, causing the kill vehicle to fly far off its intended course.

The thrusters, which help steer the kill vehicle, have a history of performance problems. In the Jan. 28 exercise, a kill vehicle equipped with a new thruster model was supposed to make a close fly-by of a target.

None of the press releases acknowledged the malfunction — nor did the missile agency’s director, Vice Adm. James D. Syring, in three subsequent appearances before congressional panels.

Neither Syring nor the contractors have said publicly why they stayed silent.

Whatever their rationale, by characterizing the test as a success, the agency and the contractors may have bolstered the prospects for performance bonuses, according to missile defense specialists.