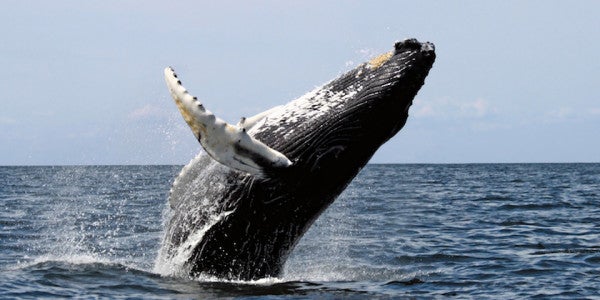 The Air Force is proposing to conduct live-fire tests of missiles and other ordnance in and above the ocean about 50 miles west of Kauai.

Today is the deadline to submit public comments on the tests, which the military acknowledges could deafen some marine mammals.

The 86th Fighter Weapons Squadron, based at Eglin Air Force Base, Fla., submitted a request with the National Marine Fisheries Service for authorization to harm the hearing of an estimated 637 whales and dolphins.

From Sept. 1 through August 2022, as part of the Long Range Strike Weapons Systems Evaluation Program (WSEP), fighters and bombers would test the ordnance over the ocean range operated by the Pacific Missile Range Facility at Barking Sands.

“Without WSEP operations, pilots would be using these weapons for the first time in combat,” the Air Force said in the application, submitted in December. “On average, half of the participants in each unit drop an actual weapon for the first time during a WSEP evaluation. Consequently, WSEP is a military readiness activity and is the last opportunity for squadrons to receive operational training and evaluation before they deploy.”

Related: These Navy Dolphins Are On A Mission To Save An Endangered Species »

The squadron plans to test about 110 munitions each year in the area, which has a depth of 15,240 feet.

The Air Force said in its application that no mammals are expected to die as a result.

“Sound and pressure metrics associated with exploding ordnance were determined to be the only activities with potential for significant impacts to marine species,” the application said.

A total of 36 animals could sustain permanent hearing loss, the Air Force said, based on density estimates for various marine species. About 382 animals could suffer temporary hearing loss, and about 219 animals would experience significant change in natural behavioral patterns — migration, surfacing, nursing, breeding and feeding — due to the explosions.

The humpback whale, sei whale, minke whale, pygmy sperm whale, dwarf sperm whale and Fraser’s dolphin are some of the mammals listed that could be harmed.

Marti Townsend, director of the Sierra Club of Hawaii, said she was concerned about the impact on marine life.

“Military testing is ruining the quiet of our oceans, quiet that we know marine mammals need to navigate, hunt, raise their young and communicate,” she said by telephone Sunday. “Federal courts have ruled that military exercises harm marine mammals and must be strictly regulated.”