USS Bonhomme Richard, its fate uncertain, would be one of largest ships Navy has lost outside of combat

Even if the ship is saved, it will be out of action for an extended period of time, and that will limit what the Navy can do in deploying its forces. 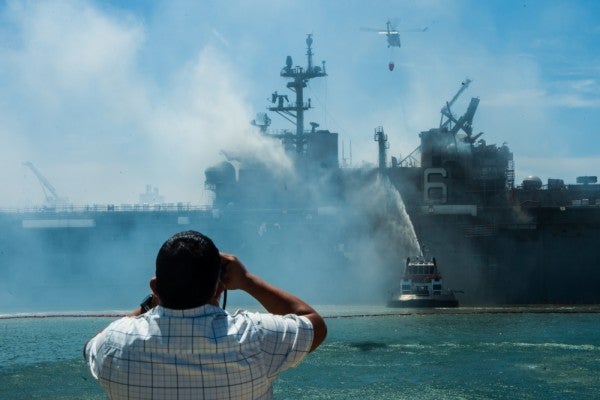 For as long as the Navy has had ships, there have been fires, and some have been deadly. That the Bonhomme Richard appears to have escaped without fatalities also explains why the fire has been so hard to put out.

Hardly anyone was on board when it started.

“As counter-intuitive as this sounds, I would much rather fight a fire at sea with a whole crew than fight it dockside,” said Bryan McGrath, a retired Navy commander. “The ability to act quickly with a massive response and inhibit the spread is aided when you have all your people.”

Some military experts believe the Bonhomme Richard can't be saved, and if that's the case, the mini-aircraft carrier — it was being retrofitted to deploy the latest-generation fighter jets — would be among the largest Navy ships ever lost.

It's already joined the ranks of significant non-combat fires and explosions that have occurred while ships have been at a stateside pier or anchored nearby.

In 1905, the gunboat Bennington blew up in San Diego Bay, killing 65 sailors. In 1944, 322 people died when an ammunition ship exploded at a port north of San Francisco. Fifty people perished in 1960 when the carrier Constellation caught fire during the final stages of construction at the Brooklyn Naval Yard.

“We obviously don't know yet what happened here, but the dangers in the industrial environment are well-understood,” McGrath said. “Crews are grinding, welding, chipping — all those activities have the capacity to start a fire, and a ship is full of flammable materials.”

McGrath, who spent 21 years in the Navy, including a stint as commander of the Bulkeley, a guided-missile destroyer, said crews at sea are trained to set smoke and flame boundaries when a fire breaks out, limiting its spread to adjacent spaces.

“it's not like a structural fire; you can't just pour water on it from the outside,” he said. “You have to be inside where the fire is, get to the source of it.”

That's easier done if the ship is fully staffed. The Bonhomme Richard has about 1,000 sailors assigned to it. When it caught fire Sunday morning at Naval Base San Diego, about 160 people were on board.

Fifty-nine people — 36 sailors and 23 civilians — were treated for minor injuries, including heat exhaustion and smoke inhalation, the Navy said Monday afternoon. Five people who were hospitalized have been released.

McGrath described military shipyards in general as places “where an almost insane devotion to safety, good housekeeping and procedural compliance is required. It's hard to imagine one or more of those things not being involved in the cause or spread of the fire.”

An investigation will be “exhaustive,” he said, and probably last months.

Also to be determined is the fate of the ship, which cost $761 million, according to estimates by the Federation of American Scientists, and was at the tail-end of a two-year, $250 million upgrade. Navy officials said they are hopeful it will sail again, but some military observers — noting the extensive damage so far, including the collapse of the forward mast — believe it will have to be scrapped.

Lawrence Brennan, a retired Navy captain who is now an adjunct law professor at Fordham University, told the Associated Press that because of the vessel's age — 23 — the fire could be especially destructive if it reached the engine room and other critical areas.

“The heat of a fire of this nature can warp the steel, and that can be a major problem for any ship,” he said. “On an older ship, it's even more of a problem.”

Brennan said it was worrisome that the fire continued to burn for more than a day.

“My guess is that … there's going to be a lot of internal damage,” he said.

If the ship can't be saved, it would be one of the largest losses, in terms of size and tonnage, in Navy history. It's 844 feet long and weighs about 40,000 tons. The carrier Lexington, sunk during the World War II battle of the Coral Sea, was 888 feet and 47,000 tons.

Even if the ship is saved, it will be out of action for an extended period of time, and that will limit what the Navy can do in deploying its forces. The Bonhomme Richard was being upgraded to accommodate the F-35B fighter, one of a handful of amphibious ships so-equipped.

U.S. Defense officials have been eyeing the mini-aircraft carriers as a way to keep the newest-generation of fighters continually available in the Pacific as the U.S. counters strategic threats from China. Monday, the Trump Administration rejected Beijing's sovereignty claims to the South China Sea.

“Losing that ship, even if it's just for a while — it's a big deal,” McGrath said.