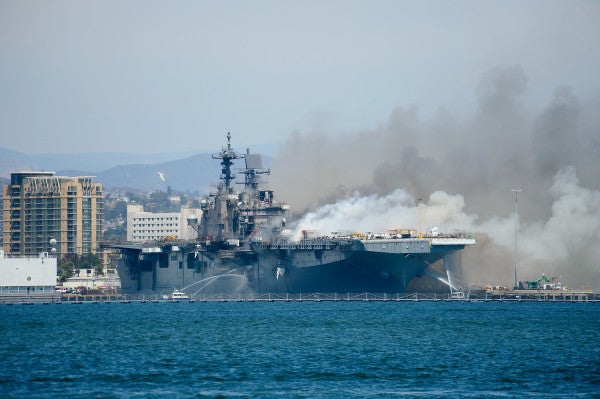 The admiral visited the warship at Naval Base San Diego last Friday, just one day after the Navy announced that all known fires aboard the vessel had been extinguished after more than four days of around-the-clock firefighting.

“I wanted to see the ship firsthand, the extent of the damage,” he told reporters at a press briefing.

Related: Photos show the damage sustained by the USS Bonhomme Richard during the fire

New details of the damage have since emerged.

“There is fire and water damage, to varying degrees, on 11 of 14 decks,” Gilday wrote in the summary first reported by Defense News' David Larter. “The island is nearly gutted, as are sections of some of the decks below,” he said, adding that “sections of the flight deck are warped/bulging.”

A fire was first reported on the big-deck amphib at around 8:30 am on Sunday, July 12. The fire, which is suspected to have started in a lower vehicle storage area, triggered several explosions as it tore through the ship.

Gilday wrote in his summary that although the firefighting response was immediate, a wind that swept through the vessel, which has been in maintenance for the past couple of years, and several explosions caused the situation to spiral out of control.

The fire, he said, spread “quickly up elevator shafts, engine exhaust stacks, and through berthing and other compartments where combustible material was present.”

Hundreds of sailors and federal firefighters battled the burning warship for over four days before the fires were finally out. In certain places, the fire was burning at temperatures in excess of 1,000 degrees.

“There were Sailors from across the San Diego waterfront who responded to this fire — hundreds of them; many without receiving direction to do so,” Gilday said in his summary, revealing that many Bonhomme Richard sailors who helped fight the fire “had to be ordered … and re-ordered … to go home at some point and get some rest.”

In the early stages of the fight, the Navy expressed optimism that the ship could be saved, but on Friday, Gilday hinted that it might not be worth it to repair the ship, which was first commissioned in the late 1990s.

“I am 100% confident that our defense industry can put this ship back to sea,” he said. “But having said that, the question is should we make that investment in a 22-year-old ship. I'm not going to make any predictions until we take a look at all the facts.”

The cause of the fire is currently under investigation.

Related: The Bonhomme Richard fire raises questions about whether the Navy learned anything from its last ship fire

Before the fire, the Navy had been working to modernize the Bonhomme Richard, refitting the older Wasp-class amphibious assault ship to carry the short takeoff/vertical landing F-35B Lightning II Joint Strike Fighter.

The service is, however, already making new America-class amphibs. In fact, it just commissioned the new USS Tripoli last week.

“You're not going to fix it,” retired U.S. Navy Capt. Earle Yerger, the former commander of the amphibious assault ship USS Bataan told Insider recently, adding that the ship's future probably involved being towed out and sunk to a “deep point in the ocean.”