'It looks cleaner from the outside (but) inside ... we're still fighting a major fire.' 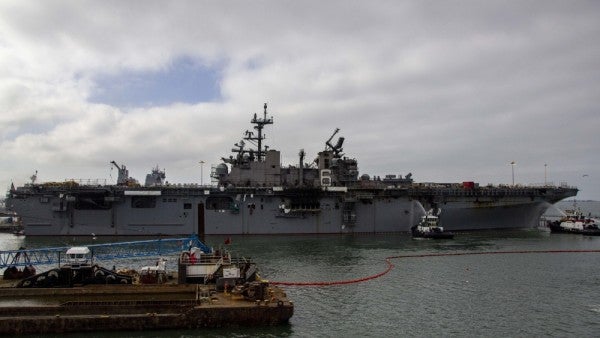 As fire on the amphibious assault ship USS Bonhomme Richard entered its third day, the Navy said its crews have made significant progress fighting fires around the clock and reducing smoke and they will soon begin tackling two isolated fires on the ship.

Rear Adm. Philip Sobeck, commander of Expeditionary Strike Group 3, said the ship so far is stable and the structure is safe.

“We still have an active fire which we are combating both from within and externally from multiple access points,” he said.

He said it's too early to tell how much damage the fire has done to the ship and whether the ship will survive.

“When you look at the outside of the ship, you don't get the full picture,” he said.

“We haven't been inside of the ship well enough to get a full picture. It looks cleaner from the outside (but) inside, again, we're still fighting a major fire.”

He said there are two main fires burning, one in the forward part of the ship and one aft. In the forward section, crews haven't been able to get to the fire because it was too hot, he said.

Crews have been trying to cool the metal in the ship to reach the fire. Navy helicopters from Helicopter Sea Combat Squadron 3 have made 1,200 water bucket dumps, he said.

Both fires appear to be in the upper part of the ship.

Sobeck said the Navy has been able to investigate the four main engineering spaces on the ship and there's no major damage there. Also the fire is still far away from the 1 million gallons of fuel the ship is carrying, he said.

More than 400 sailors and fire crews from across the San Diego waterfront have been fighting the blaze.

There have been 61 injuries; 38 sailors and 23 civilians have been treated mostly for minor injuries related to firefighting. The last five at the hospital left by Monday afternoon.

Sobeck said the cause of the fire will be investigated but, he added, added cabling and duct work — that feeds through doors, hatches and scuttles during maintenance activities — contributed to the fire's spread. It created fuel for the fire and more debris that had be be removed before crews could get to the fire, he said.

The ship has an aqueous film-forming foam system, which puts foam on fires in the ship. Sobeck said that system was operational but because of an explosion Sunday morning, crews who were preparing to launch the system had to leave before they could.

Once the fire started below in a lower vehicle storage area, he said, it traveled upward to the “well deck” which is a hangar-like open area — with a lot oxygen to fuel the fire.

“Once the fire hit that amount of oxygen, it then found other ways to go up some ventilation … and then went off to the races,” Sobeck said.

Water from the firefighting had caused the ship to list starboard to one side on Monday but as of the evening, the list eased as crews continued to pump accumulated firefighting water out of its spaces.

A photo recently posted on Reddit from someone on a Navy helicopter appeared to show holes on what is called the island of the ship, which includes the forward and main masts, the bridge and the air traffic control center.

Sobeck said Monday that the fire has been in the superstructure of the ship and its upper decks and that the ship's forward mast had collapsed.

Sobeck said Tuesday he does not know when the fire will be out, but it's possible within the next 24 hours.

Smoke from the ship also has abated significantly. Smoke and fumes from the ship had polluted the skyline and air throughout San Diego since the fire began at 8:30 a.m. Sunday.

Capt. Timothy Barelli, of Coast Guard Sector San Diego, said his organization is taking precautions to minimize chances of water pollution by putting booms in the water, but as of now there is no sheen in the water that would indicate an oil spill.

Some observers, including former sailors and Naval experts, have questioned whether the Navy will scuttle the ship, but Sobeck said Monday he believes the Navy will ultimately repair it.

This is one of the biggest fires on a Navy ship outside of combat.

The Navy uses amphibious assault ships to deploy Marines in amphibious landings. During operations, the ships conduct flight operations with helicopters and jet aircraft, such as the AV-8B Harrier and its replacement, the F-35 B Lightning.

While deployed, these ships carry more than 2,000 sailors and Marines, but only 160 sailors were on the ship just before fire broke out Sunday morning.