After the USS Bonhomme Richard burned for five days at a shipyard in San Diego, it begs the question: Did the lessons the Navy learned from the USS Miami blaze eight years ago mitigate the fire on the Bonhomme Richard? 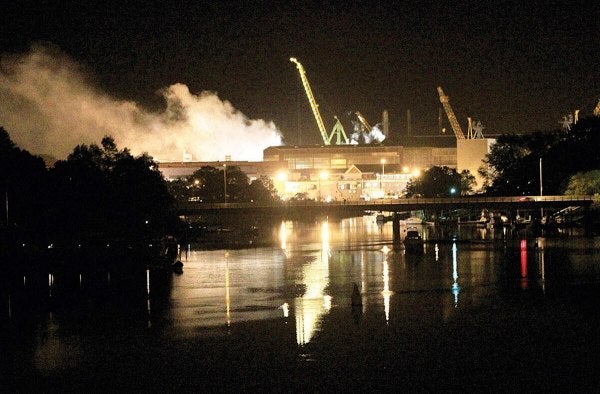 In 2012 a civilian worker aboard the dry-docked USS Miami wanted to go home early, so he found a bag of rags in an unwatched, uninhabited living area nearby, set it ablaze with a Bic lighter and went back to his workspace to wait for the fire alarm.

By the time the skeleton crew aboard the Miami nuclear submarine discovered the fire, it had spread to some vacuum cleaners. The flames filled the compartment with smoke, which bedeviled the crew's attempts to reach it quickly — or even pinpoint its source. What had started as a little fire became a conflagration.

Ultimately, the $400-million ship that had burned in the Portsmouth Naval Shipyard in Kittery, Maine, was deemed too expensive to repair and was scrapped. The arsonist confessed to his crimes and was sentenced to 17 years in prison. The Navy's internal investigation of the fire produced a nearly 200-page report.

Now, after the USS Bonhomme Richard burned for five days this week at a shipyard in San Diego, it begs the question: Did the lessons the Navy learned from the Miami eight years ago mitigate the fire on the Bonhomme Richard?

Did any of the shortcomings described in the Miami contribute to the worst ship fire in recent memory?

“One of the questions I have is: Did we fully and adequately implement those recommendations,” he said.

“Because that fire was probably the most recent similar mass-conflagration we've had. We learned from that. When we completed the investigation, did we just leave it in the rear-view mirror or did we no-kidding take it seriously?”

Related: The Bonhomme Richard fire raises concerns over whether the Navy can repair ships damaged in war

It was an open question on Friday. Gilday visited the ship in San Diego and at a press conference afterwards praised the heroic efforts of the hundreds who fought and defeated the fire in an extremely challenging situation.

He said there are plans for three Navy investigations: routine criminal and safety inquiries and a “command investigation” that would look at fire-related procedures, to help understand what the Navy did right on the Bonhomme Richard and what it did not do right, so the Navy can learn from it and apply those lessons in the future.

“Make no mistake, we will follow the facts of what happened here and will be honest with ourselves, and we'll get after it as the Navy,” he said.

Gilday said the Navy has ordered commanding officers of every ship in the fleet to assess the fire training levels of their people, whether they have enough of the necessary equipment and whether it is operable, and to assess whether the procedures they have in place are adequate.

Eight years ago, the U.S. Navy convened a panel for an internal probe of the Miami incident. Their report emphasized that the Navy should learn from its fires.

“The Navy experiences a major fire of comparable magnitude to MIAMI approximately every five years,” the report said. “Without a systemic approach to corrective action, this pattern is likely to continue.”

The panel's 200-page report included 99 recommendations to improve fire prevention and firefighting readiness, especially on ships dry-docked in industrial areas, where fire risk is higher and fewer crew members are aboard.

“Unlike other mishaps, where a single link in the chain failed after others were weakened, the Miami investigation paints a picture of multiple processes within several organizations going through the motions, with no particular failure, but lacking focused attention and oversight, and missing the mark in the aggregate,” the commander of the U.S. Fleet Forces wrote in a letter accompanying the report.

The fire panel said in the Miami report that they reviewed data from decades of fire-related mishaps aboard Navy ships, and there were a few common threads.

“While not all mishaps reviewed by the panel revealed a pattern of common or recurring deficiencies, many of them did, suggesting gaps in the processes by which the Navy learns and improves in these areas,” the report said.

Factors in the Miami incident described in the report appeared to also be factors in the fire on the Bonhomme, experts said.

Specifically, only a fraction of each ship's crew was on board at the times of the fires. Also important ship systems were down for maintenance, and the fires started in areas of the vessels that were not being watched at the time.

Also repair work on the Bonhomme Richard meant watertight doors could not be quickly closed to contain the blaze and starve it of oxygen. Gilday said he couldn't speak in detail but each ship has fire risk mitigation plans for when they're undergoing repairs.

Lawrence Brennan, a retired Navy captain and professor of international maritime law at Fordham University in New York, told the San Diego Union-TribuneThursday that the Navy had not fully implemented recommendations from the Miami report, including an area of particular concern to the panel: The Navy has no single organization that is accountable for implementing recommendations from fire-related mishaps and lessons learned.

“We don't have those recommendations fully implemented, and I'm not sure we ever will, until we get beyond the state of individual accountability and adopt institutional culpability,” Brennan said. “We'll never get to the state of integration of command, control, communications, and intelligence until we get beyond individual accountability and adopt institutional culpability.”

As for lessons, it appears the Navy has learned from other fires on ships and applied it in practice, he said.

“Probably the best result has been that there have been no serious injuries or fatalities,” Brennan said. “They know how to retreat at the right time when they were overwhelmed.”

It's easier for the crew to be overwhelmed when only a fraction of the crew is on board, experts said.

The Miami had only a few crew members aboard the submarine when the fire started, and they were responsible for multiple tasks in multiple parts of the ship. The arson was possible because the watchman was accomplishing another responsibility elsewhere on the ship, the report said.

When the Miami fire broke out, the crew members got help from shipyard employees and federal firefighters, but they weren't as familiar with the ship and there was confusion about the chain of command, which resulted in the federal firefighters and the crew working separately early in the fire.

The report noted that there are very good reasons for reducing crew on ships when modifications are underway. Among those reasons is that the work may render areas of the ship uninhabitable, and letting crew members have time away from the ship is good for their quality of life.

Rod Sullivan, a maritime lawyer who served in the Navy, told the Union-Tribune on Thursday that it's important to remember that having a ship in industrial areas for modification is inherently risky no matter what.

“Hot work,” such as welding, increases fire risk; scaffolding complicates firefighting and can give a fire fuel, and mitigation such as quickly shutting airtight doors to contain the fire is often implausible because of ducts and wires running through them.

The fire watch is the first line of defense against this kind of shipyard fire, he said. Staging fire extinguishers at places where hot work is being done is also important.

But even then, it's hard to mitigate all the risks that stopovers in industrial areas present to ships.

“Maybe personnel and firefighters need to be increased, but the (shipyard) is the worst situation for firefighting on a ship,” Sullivan said. “You're always putting the ship at the most risk.”

The fire on the Bonhomme Richard started Sunday morning in a storage cargo hold. Navy officials said no welding or other hot work was being done in the hold, to their knowledge. The blaze traveled up a well deck — a hangar-like structure — and shot through upper decks, scorching and melting the ships' superstructure and toppling its forward mast.

Navy leaders said the ship's system that starves fires of oxygen was not in operation during ship repairs. Also crew members preparing to launch another system that puts foam on flames were forced to evacuate by an explosion.

In total, more than 400 sailors and fire crews from across the San Diego waterfront fought the blaze, including sailors from the Bonhomme Richard, the aircraft carrier Abraham Lincoln, the guided-missile destroyer Fitzgerald and eight other ships. Federal firefighters from bases throughout Southern California also came, some from as far away as Ventura County.

There were 61 injuries — 38 sailors and 23 civilians have been treated mostly for minor injuries related to firefighting, the Navy said. The last five at the hospital left by Monday afternoon.