In Boot Camp, A Drill Instructor Taught Me The True Meaning Of Practice 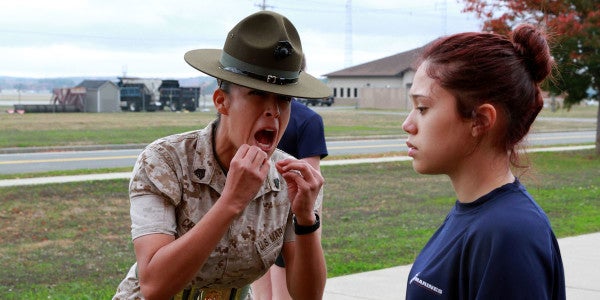 When people say Columbia Journalism School is like boot camp for journalists, they are not kidding.

Instead of carrying a rifle and a 100-pound pack on my back, I’m lugging around camera gear and tripods in either the hot, cool, or freezing cold streets of New York City.

Moreover, you force yourself to speak with strangers, or at least, try to get them to speak with you, just to find a story to write or record for your class assignment, and possibly, publish on your Medium page.

And sometimes, our professors demand a lot from us, which I understood. One professor had us go over story pitching at every class. This professor also had us do weekly posts that must include people with their names and where they were from, not just photos or videos of people without any information.

Some of my classmates did not understand why the professor made us work on story pitching and posting, in addition to completing the class assignments, and the rest of our arduous course load. I felt as if I was the only one who didn’t mind this “mad” course load. In fact, I enjoyed it. Which was probably I did not comprehend my classmates’ point-of-view.

Nevertheless, I tried to share some wisdom with my classmates on our professor’s mad syllabus and ways, by telling them there is a purpose, as well as sharing a quote from a drill instructor I had in boot camp.

It all started with drill. Drill is usually performed in ceremonies and is a part of military tradition. It is taught in boot camp and is one of the ways the military teaches discipline to the new service members.

When I was in boot camp, we had to practice drill on an almost daily basis. Our drill instructors would sometimes have us practice first thing after we speedily dressed up, or in between scheduled training.

One of my drill instructors, then-Staff Sgt. Rosie Suarez-Woods, made it all look so easy. My November company platoon sisters and I tried repeatedly to duplicate her drill actions. A handful I believe were successful. Most of us were not.

As easy as Suarez-Woods made it look, it was hard. Hard as fuck, really.

During one drill practice, she said something that stayed with me to this day, and it's something I always return to when professors or bosses have me and my colleagues or classmates do something repeatedly: “An amateur practice until she gets it right. A Marine practice until she can't get it wrong.”

After I told my classmates Suarez-Woods quote, I was met with silence. I added that they can replace “Marine” with “journalist” or “professional.” Perhaps they had to see her in action to get it.

As for me, I’ll keep practicing. Maybe I am masochist, or maybe it’s a challenge I’m loving. Whatever the case, here's to practicing through the cold and the snow, the heat and humidity, the heavy rain, the sardine-packing in a subway car, the carrying of heavy gear, the constant sounds of “No” until I hear a “Yes.”

After all, there's a purpose, and I want to do it until I can't get it wrong.

Sara Samora served in the Marine Corps from 2009 to 2013. She never deployed but was stationed in Okinawa, Japan, and Camp Pendleton, Calif., where she made IDs and worked admin. She is now pursuing a master’s degree at Columbia Journalism School. Send her tips at sara.samora@columbia.edu, and follow her on Twitter @SaraESamora. This column represents her own opinions, which are not necessarily those of her classmates, Columbia University, nor Columbia Journalism School.