The bipartisan coalition of 58 ex-U.S. officials — which includes former Secretary of State Madeleine Albright, Defense Secretary Chuck Hagel and CIA Director Leon Panetta — made the sweeping dismissal in a statement issued a day before the House was expected to pass a measure blocking Trump's declaration. 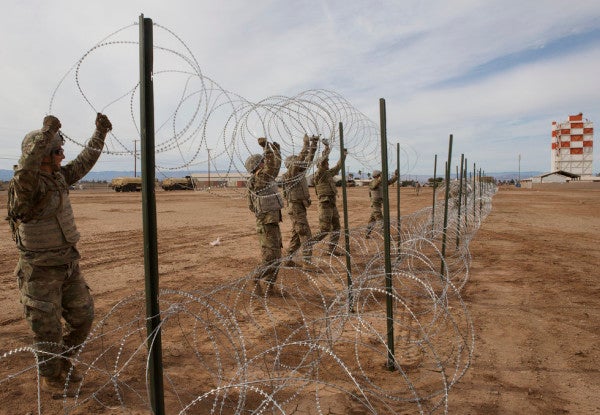 The bipartisan coalition of 58 ex-U.S. officials — which includes former Secretary of State Madeleine Albright, Defense Secretary Chuck Hagel and CIA Director Leon Panetta — made the sweeping dismissal in a statement issued a day before the House was expected to pass a measure blocking Trump's declaration.

“The President's actions are at odds with the overwhelming evidence in the public record, including the administration's own data and estimates,” the officials said, citing government statistics showing illegal crossings on the Mexican border are almost at a 40-year low; that the vast majority of drugs smuggled into the U.S. come through legal ports of entry where a wall would be of no help and that immigrants actually commit crimes at a far lower rate than American citizens.

“Under no plausible assessment of the evidence,” the officials continued, “is there a national emergency today that entitles the President to tap into funds appropriated for other purposes to build a wall at the southern border.”

After Trump declared a national emergency on Feb. 15, the White House said he had unlocked about $8 billion from military reserve budgets to use for the border project he used to promise Mexico would pay for.

The emergency allocation flew in the face of the $1.4 billion Congress had approved for the construction of 55 miles of bollard fencing on the border.

Echoing laments from congressional Democrats and some Republicans, the former national security officials charged Trump had blatantly violated the Constitution's separation of power principles by trying to get more wall cash than Congress had given him.

Additionally, the officials lambasted Trump for wrecking U.S. credibility on the world stage.

“By declaring a national emergency for domestic political reasons with no compelling reason or justification from his senior intelligence and law enforcement officials, the President has further eroded his credibility with foreign leaders, both friend and foe,” their statement read.

“Should a genuine foreign crisis erupt, this lack of credibility will materially weaken this administration's ability to marshal allies to support the United States, and will embolden adversaries to oppose us.”

The stinging statement was entered into the Congressional Record and is meant as a token of support for the various legal challenges mounted against Trump's emergency order.

The Democratically-controlled House is expected to pass a resolution Tuesday that would rescind Trump's declaration.

The Senate, which is controlled by Republicans, 53-47, will then have to vote on the measure within 18 days.

Ten Republican senators have publicly criticized Trump's declaration, suggesting there may be enough upheaval in GOP ranks in order to break the upper chamber's 50-vote threshold and pass the emergency-blocking measure.

However, Trump has already said he's prepared to issue the first veto of his presidency if the resolution passes through Congress. The likelihood of Trump having to use his veto powers underscores the unpopularity of his border wall obsession.

Should Trump end up vetoing the resolution, two-thirds of both chambers of Congress would have to unite against him to override the executive action.