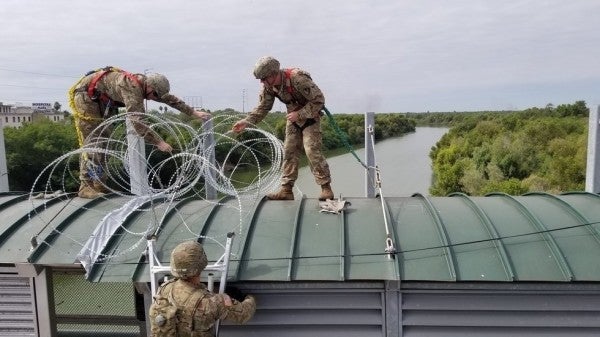 WASHINGTON — The head of U.S. Border Patrol defended using military personnel at the U.S.-Mexico border, saying extra resources are needed “as long as we face this crisis” of an influx of migrants.

Speaking at a House Homeland Security hearing Thursday, Border Patrol Chief Carla Provost said apprehensions and drug seizures at the border have become “overwhelming.” She said agency officers are already working 50 hours a week, and in some cases she must ask them to work more in a physically and emotionally demanding role.

Committee Democrats led by Border Security Subcommittee Chairwoman Kathleen Rice of New York acknowledged the influx of migrants, but questioned agency decisions “to take trained border patrol agents away from their jobs that they are trained to do and have them do different things that independent contractors could be hired to do.”

Immigration and border security has been a fraught political issue during President Donald Trump's first term, especially over the policy last year of separating children from families detained at the border. Although Trump eventually signed an executive order ending that practice, border authorities continue to grapple with how to house and process an influx of migrants, many of whom turn themselves in to authorities to claim asylum.

Trump last week tweeted that Immigration and Customs Enforcement will detain and deport undocumented immigrants, praising Mexico's efforts to keep Central American migrants from moving toward the U.S. southern border. An administration official later clarified that the president was referring to people who are denied asylum and issued deportation orders but don't appear for their court dates.

U.S. Customs and Border Protection reported 593,507 apprehensions at the border from October through May, including 332,981 traveling in family units.

On use of the military, Provost in her prepared statement explained the National Guard and other military personnel have helped with surveillance and infrastructure repair, logistics planning and support for building barricades and fencing.

Homeland Security Committee Chairman Bennie Thompson recognized the strain on border resources, but expressed concern about how the administration is using personnel and funds in ways that were not authorized by Congress.

“I support Congressional oversight of the evolving use of these resources by the Trump administration for what appears to be an immigration based-agenda,” Thompson said.

The Border subcommittee will continue to be in contact with CBP in order to obtain additional documents and reports to fully assess the ongoing issue at the border.