Among the roughly 800,000 federal employees who've gone without pay in the three weeks since the shutdown began are tens of thousands of Border Patrol agents, Customs and Border Protection officers, immigration judges and Coast Guard crews — the workers on the frontlines of the problems that the White House and Congress have been fighting over 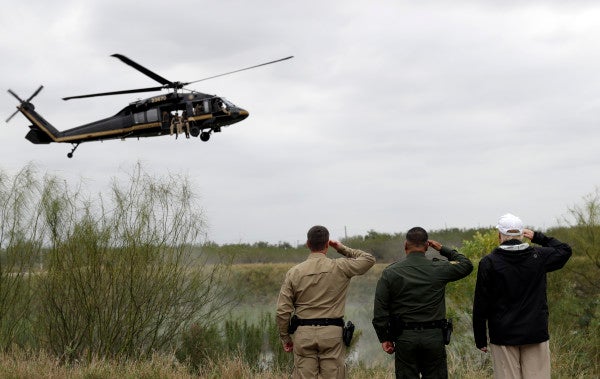 WASHINGTON — President Donald Trump saluted a Blackhawk helicopter hovering over the Rio Grande on Thursday, seeking to highlight the need for $5.7 billion for his trademark border wall to stop what he calls an “invasion.”

Next to the president stood a Customs and Border Protection officer and a Border Patrol agent. Both were working unpaid during the partial government shutdown, which on Friday tied the record for the longest in U.S. history.

Among the roughly 800,000 federal employees who've gone without pay in the three weeks since the shutdown began are tens of thousands of Border Patrol agents, Customs and Border Protection officers, immigration judges and Coast Guard crews — the workers on the frontlines of the border security problems that the White House and Congress have been fighting over.

That irony is not lost on workers such as Terence Shigg, a Border Patrol agent at a checkpoint in San Clemente. Shigg took on a second job as a private contractor years ago, learning from his mother's experience raising four kids on her own on a federal salary.

“One thing I've learned working for the federal government is always have a backup plan,” said Shigg. He supports more miles of fencing on the border along with other resources, he says, but “I am not in favor of a shutdown.”

“That one paycheck is a big deal,” he said. “It's not something that you just can lightly dismiss.”

The president insists he has federal workers' support for doubling down on the shutdown, saying they will “make adjustments.”

“I appreciate their service to the country, they're incredible people, but many of them agree with what I'm saying,” he said Friday following a White House session on border security.

But as government employees grapple with growing financial stress, pressure is mounting to resolve the impasse. Two unions have filed suit against the Trump administration so far, including the one that represents Customs and Border Protection officers.

Vice President Mike Pence told Customs and Border Protection personnel in a Friday afternoon meeting to “focus on the mission.”

“I want to assure you that we're going to figure this thing out,” he said.

On Friday, however, there were few signs of that happening. Members of Congress left Washington for the weekend after passing a measure to ensure that federal workers will get backpay once the shutdown ends. No new negotiations to end the standoff have been scheduled.

In a tweet Friday, Trump repeated his call for a border wall. “The Democrats, Cryin' Chuck and Nancy don't know how bad and dangerous it is for our ENTIRE COUNTRY,” he said. He continued in a subsequent tweet, “The Steel Barrier, or Wall, should have been built by previous administrations long ago. They never got it done — I will. Without it, our Country cannot be safe. Criminals, Gangs, Human Traffickers, Drugs & so much other big trouble can easily pour in. It can be stopped cold!”

In fact, previous administrations have built hundreds of miles of fencing along the border. When Trump took office, about one third of the border, 654 miles, was fenced. No additional mileage has been added during his tenure, although some existing fences have been upgraded.

Democratic lawmakers have approved $1.3 billion for border security in the current fiscal year; Trump initially asked for $1.6 billion, before insisting that $5.7 billion was the minimum he would accept.

Overall, roughly 420,000 government employees are working unpaid with the equivalent of a federal IOU, and another nearly 350,000 are furloughed at home.

A significant number of them are workers who have supported Trump in the past, especially Border Patrol agents. In his campaign, Trump was endorsed by the unions that represent agents and Immigration and Customs Enforcement officers. On Jan. 3, he abruptly displaced a public briefing by Kevin McAleenan, commissioner of Customs and Border Protection, the Border Patrol's parent agency, in order to bring several leaders of the border agents' union, the National Border Patrol Council, to speak at the White House in support of a wall.

Josh Wilson, a Border Patrol agent stationed in east San Diego and spokesman for the council, which represents about 1,900 agents in the city, said its members continue to like Trump.

“The agents are certainly not happy about the prospect of missing paychecks, mortgages, car payments, childcare, everything else we have to pay for along the way,” Wilson said. “But we are glad to finally have a presidential administration willing to take border security seriously … the wall is not a be-all-end-all, but it's a necessary component.”

“Our agents are being stretched thin,” he said.

Tony Reardon, president of the National Treasury Employees Union, which represents roughly 30,000 Customs and Border Protection officers, is suing the administration over the shutdown on behalf of several officers stationed at the southern border, arguing the work-without-pay order violates labor law. Customs and Border Protection personnel work in 328 ports of entry along the border, as well as airports and seaports overseas to process people seeking to enter the United States and facilitate trade.

A one-time action allowed Coast Guard personnel to be paid Dec. 31, but more than 55,000 Coast Guard active-duty, reserve and civilian employees will not receive their pay and benefits Jan. 15, Lane said.

The shutdown is also being felt far beyond the border, in federal courts and by immigration judges already drowning under a backlog of nearly 810,000 pending immigration cases. All of the Justice Department's roughly 400 immigration judges have been furloughed. The Executive Office for Immigration Review said that while hearings will proceed for immigrants currently held in detention, all other hearings will be rescheduled, exacerbating wait times that currently stand at an average of 718 days.

SEE ALSO: Government-Employed Vets Are Getting Payless Paychecks As The Shutdown Drags On

WATCH NEXT: What It's Really Like To Deploy To The Border