National Guard troops deployed to the border in Arizona are puttering around doing administrative and maintenance work in order to... 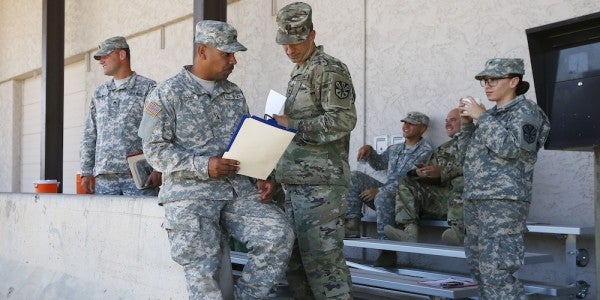 National Guard troops deployed to the border in Arizona are puttering around doing administrative and maintenance work in order to keep them out of potentially dangerous situations and to allow the border patrol to focus on working in the field.

Troops have been deployed to the border in the past — both Presidents George W. Bush and Barack Obama sent troops there under similar circumstances — but the ones currently stationed in Arizona are even farther from the border than past deployments, according to a Politico report, and have no involvement in law-enforcement activity there.

President Donald Trump has called for up to 4,000 troops from various states to deploy to the border from Texas to California. Only about 200 Arizona National Guard soldiers have been put to work there, less than one-third of the 682 who have been authorized to deploy.

The troops are not allowed to join patrols or operations to detain people trying to cross the border undetected.

“There is a false narrative that we are doing ride-alongs,” Capt. Macario Mora of the Arizona National Guard told Politico. The troops also are not armed, Mora said, “and there is no anticipation that will change.”

Many have been pressed into service providing administrative support and doing upkeep, including feeding horses and shoveling manure out of stables, office work, and basic repairs and maintenance work on border patrol facilities and vehicles. “We fix flats,” one sergeant, a cook, told Politico.

Troops in Arizona are kept far from the border, though some have been given training to monitor the remote cameras the border patrol has set up along the frontier. In Texas, troops are allowed to visually monitor the border, but the ones tasked with surveillance are not allowed to look into Mexico. Those troops are also performing maintenance and doing repairs on roads and vehicles.

Jurisdictional issues and legal restrictions are part of the reason troops are tasked with such a narrow range of duties, but there is also an effort to keep the soldiers out of trouble, particularly in areas where they could encounter criminal groups along the border.

The soldiers are not really trained or equipped for law-enforcement duties, and officials are still wary of the potential risks involved in them interacting with civilians. Officials are still mindful of the 1997 killing of an 18-year-old by marines who were patrolling along the Rio Grande River in Texas as part of a drug-surveillance patrol.

Related: National Guardsmen Can Patrol The U.S. Border But Can’t Look Across It »

Esequiel Hernandez was shot and killed within sight of his home by marines who had followed him as he herded goats along the river. The marines, who had been deployed to the area secretly days before, said Hernandez pointed his .22 rifle at them fired twice in their direction. A prosecutor and Texas Rangers doubted that story but were unable to indict the marines on a murder charge, leaving locals bitter.

Mora, the Arizona National Guard captain, told Politico that the troops were in a “much safer environment” miles away from the border. “It definitely helps mitigate the risk of the National Guard running into conflict,” he said.

The troops' muted presence stands in contrast to Trump's rhetoric about the threats posed by border crossers and about his administration's response.

The deployments, paid for by the Pentagon, are only funded through September, the end of the fiscal year. It's not clear if funding will be extended beyond that, and other events may limit or curtail the deployments going forward.

Governors from at least eight states have said they withhold or withdraw their states' National Guard troops from the border, many of them citing dismay over the Trump administration's now-rescinded policy of separating children from their parents as they cross the border.