A tentative plan to build 20 miles of extra border wall in Arizona, on top of the already approved 100-plus miles, was put on hold Monday by the Pentagon. 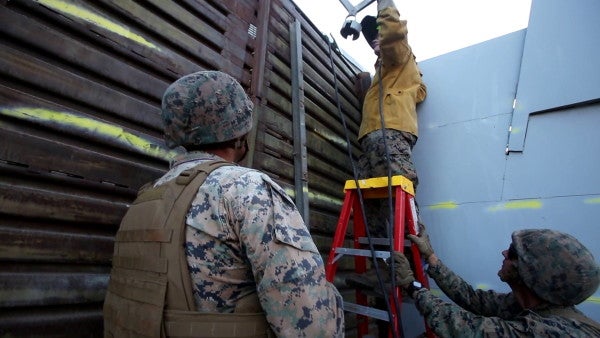 A tentative plan to build 20 miles of extra border wall in Arizona, on top of the already approved 100-plus miles, was put on hold Monday by the Pentagon.

Federal officials hoped to build the extra 20 miles of wall in the Border Patrol's Tucson and Yuma sectors. The Army Corps of Engineers said late last month that funds would come from other wall contracts that might cost less than expected. But those savings did not materialize, according to documents filed Monday in federal court in Washington, D.C.

The 20 miles of wall would have cost an estimated $200 million to $400 million in anti-drug smuggling funds from the Pentagon, say the documents. They were filed in a lawsuit brought by the Tucson-based Center for Biological Diversity and two wildlife groups trying to stop construction of the border wall. The location of the 20 miles of wall put on hold is unclear, but documents indicate the Tucson Sector project may have involved a stretch east of Nogales.

Construction on other wall projects in Arizona could start as soon as next month. Those projects include about 20 miles of wall in Cochise County and more than 40 miles along the Cabeza Prieta National Wildlife Refuge and Organ Pipe Cactus National Monument. About 70 more miles of wall are planned near Yuma.

~popular_source-pageview
border wall
the wall that mexico isn&apos;t paying for