A group that has so far raised more than $22 million on GoFundMe announced on Monday that it had constructed a small portion of border wall on private land, the latest attempt to build President Donald Trump's highly divisive barrier on the US-Mexico border 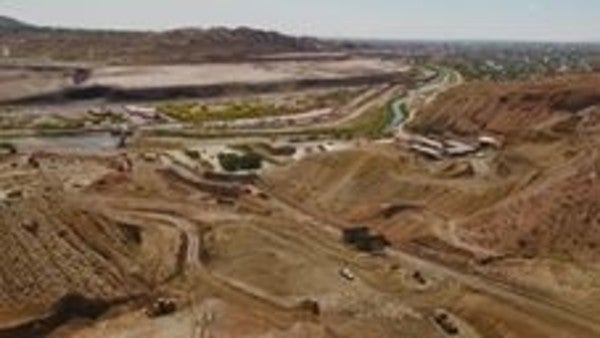 A group that has so far raised more than $22 million on GoFundMe announced on Monday that it had constructed a small portion of border wall on private land, the latest attempt to build President Donald Trump's highly divisive barrier on the US-Mexico border.

We Build the Wall's GoFundMe campaign to privately pay for the wall emerged in the days leading up to last year's 35-day partial government shutdown— the longest in history, and which was spurred by Trump's demand for more than $5 billion from the federal government for the border wall. The president was eventually allotted $1.37 billion for steel fencing along the southern border, much less than the initial sum sought out by the White House.

In last week's temporary injunction to stop construction, U.S. District Judge Haywood Gilliam Jr. noted “the position that when Congress declines the Executive's request to appropriate funds, the Executive nonetheless may simply find a way to spend those funds 'without Congress' does not square with fundamental separation of powers principles dating back to the earliest days of our Republic.”

Trump took to Twitter in response, blasting “another activist Obama appointed judge” who “has just ruled against us on a section of the Southern Wall that is already under construction.”

Another activist Obama appointed judge has just ruled against us on a section of the Southern Wall that is already under construction. This is a ruling against Border Security and in favor of crime, drugs and human trafficking. We are asking for an expedited appeal!

Now, a private group is taking action. In a slew of social media posts, We Build the Wall announced that, with the help of its GoFundMe campaign, it had constructed the first section of a wall near the Texas-New Mexico border in just three days.

“Buckle up, we're just getting started!” the group wrote on Facebook. “If we can get this much done in three days, imagine what's about to be accomplished!”

The group was started by triple-amputee war veteran Brian Kolfage, who claimed in his GoFundMe campaign to build segments of the president's border wall for a fraction of government costs and without “politicians in both parties obstructing President Trump's plan to build a wall on our southern border.”

Kolfage told The Washington Post in December he initially started the campaign because “political games from both parties” were derailing construction efforts. “It's time to stop playing games with voters,” he said. On Tuesday, he wrote on Facebook “now let's get wall 2 and 3 built!”

Others involved with We Build the Wall include former White House chief strategist Steve Bannon and Kansas' former secretary of state Kris Kobach, who said the constructed wall cost around $6 to $8 million to build, according to CNN. Bannon chairs We Build The Wall's advisory board.

The main contractor working on the project is Fisher Industries, the North Dakota-based company that the president has rallied behind to receive a border wall contract from the Army Corps of Engineers, alarming military commanders and Department of Homeland Security officials, as The Washington Post reported last week.

“This is the first time any private organization has built border wall on private land,” Kobach said during a Monday interview on Fox & Friends. “The Army Corps of Engineers said that piece of land is too rugged to build on, you can't build there. Well, we built the wall, proved them wrong, and the wall has been going up over the weekend.”

As Business Insider previously reported, the group needs congressional approval if they want to build portions of the wall on federal land. But, David Bier, a border-security expert at the Cato Institute, a libertarian think tank, acknowledged that “as long Border Patrol was, you know, okay with it, and the federal government didn't intervene to prevent it from happening, then yeah, they can do whatever they want,” on private land.

Business Insider reached out to U.S. Customs and Border Patrol for comment. A spokesperson said “this project is not connected to our efforts.” We Build the Wall did not immediately respond to a request for comment.