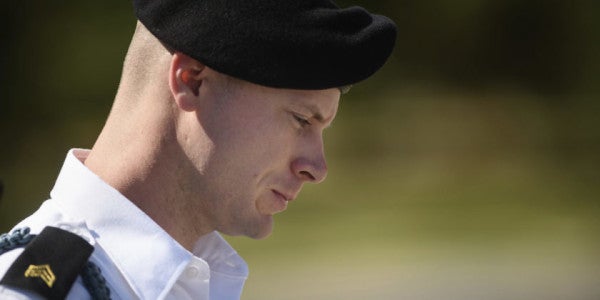 FORT BELVOIR, Virginia — The Army's Court of Criminal Appeals heard arguments Thursday in the ongoing case of Bowe Bergdahl, with the former soldier's attorneys contending that the case should be reconsidered or Berghdahl should be granted clemency because President Donald Trump's comments and tweets tainted the proceedings.

Bergdahl, the soldier who left his post in Afghanistan in 2009 and was held captive by a Taliban affiliate for five years, was sentenced in 2017 to reduction in rank from sergeant to private, forfeiture of $10,000 in pay and a dishonorable discharge.

But he received no prison time — a decision Trump called Nov. 3, 2017 on Twitter “a complete and total disgrace to our Country and to our Military.”

In remarks in the White House Rose Garden on Oct. 16, 2017, Trump also referred to statements he made as a candidate about Bergdahl, saying “I think people have heard my comments in the past.”

Fidell cited several military convictions that were overturned following statements by public figures that created an “appearance of unlawful command influence.” During Bergdahl's case, he said, the soldier did not “get a review by a convening authority liberated from the toxic comments of the president of the United States.”

As a candidate, Trump suggested Bergdahl should be executed by firing squad, pushed out of an airplane without a parachute or dropped back into Afghanistan.

“Let them have him. That's cheaper than a bullet,” Trump said at the time.

But while his comments as a private citizen are protected as free speech, as president, Trump continued to disparage Bergdahl, Fidell argued. And as commander in chief, Trump exerted undue influence on the case, he said.

“The president has tainted everything,” Fidell told the three-judge panel, led by Judge Gary Saladino.

During Bergdahl's original court-martial proceedings, Judge Army Col. Jeffrey Nance weighed Trump's words and considered whether his remarks as a candidate, followed by the reference to them in the Rose Garden, constituted unlawful command influence.

At the time, Fidell argued that Trump's confirmation of his past statements produced a “chilling effect” on the military justice system, and he pressed for no jail time for his client as a result.

The defense team also appealed for leniency based on the harsh treatment Bergdahl had endured in captivity, which included being caged, tortured and beaten.

Nance agreed to be lenient, opting not to send Bergdahl to jail. But he added that he was not influenced by the president's opinion, and he “held no fear of any repercussions from anyone” who did not agree with the sentence.

The lack of jail time provoked outrage from the president. And the case continues to needle him.

On Twitter on April 26, Trump wrote that his administration did not pay money to North Korea for the return of Otto Warmbier.
“Not two Million Dollars, not anything else. This is not the Obama Administration that paid 1.8 Billion Dollars for four hostages, or gave five terroist hostages plus, who soon went back to battle, for traitor Sgt. Bergdahl!” Trump tweeted.

Because Bergdahl received a dishonorable discharge, his case automatically qualified for an appeal.

On Thursday, government attorneys argued that, in light of the case and its results, Trump's comments simply do not constitute unlawful command influence. They said since president did not personally convene Bergdahl's court martial, he legally was not in a position to exert that kind of sway on the case.

Army Maj. Catharine Parnell also said Bergdahl, who pleaded guilty and, according to Parnell, requested his dishonorable discharge, “got what he asked for — expedited processing.”

If Bergdahl had any standing for requesting a new trial, Parnell said, it should be under the “rubric of due process,” which generally requires fairness in government proceedings, and not for apparent unlawful command influence.

“We just don't think applies to” Trump in this case, Parnell said. “If the Uniform Code of Military Justice was to apply to the president, it should be in toto.”

“Was there an effect of the 3 Nov. 2017 tweet on the appellate post-trial process? What the government is arguing is there simply was not,” Parnell added. “If a tweet extends that far, our system can never correct this.”

In May 2017, the U.S. Air Force Court of Appeals reversed a sexual assault conviction in the case U.S. v. Boyce, deciding that statements by then Sen. Claire McCaskill, D-Missouri, and Sen. Kirsten Gillibrand, D-New York, over the “Marines United” scandal created an appearance of unlawful command influence.

U.S. v. Boyce was cited heavily in Thursday's arguments, with Fidell saying that without Trump's comments, Bergdahl might have been just one of the roughly 600 soldiers court-martialed each year and “no one would have known his name.”

“You can't put Humpty back together again in terms of Sergeant Bergdahl. He is a known figure in the U.S. because the president disparaged him,” Fidell said.

Attorneys also cited rulings regarding the criminal prosecutions of officers and crew members in the separate deadly collisions of the Navy destroyers John S. McCain and Fitzgerald — cases in which both Chief of Naval Operations Adm. John Richardson and Vice CNO Adm. Bill Moran were found to have engaged in apparent unlawful command influence. The judge said remarks made regarding negligence prior to any criminal cases risked tainting the proceedings.

In the Bergdahl hearing Thursday, the judges did not give any indication which way they might decide the case. They raised questions about the reach of the president's alleged command influence and wondered whether the defense's request to reconvene the case made sense.

“If the president's tweet cast a shadow downstream,” Judge Paula Schasberger said, addressing Fidell. “Are we a part of that shadow? What is your position. Are we tainted?”

To Parnell's arguments about the fact that the president couldn't be held liable for unlawful command influence because he didn't convene Bergdahl's trial, Schasberger said, “I'm not going to lie. I'm trying really hard to keep an open mind. But I'm looking at the plain text and I'm not seeing why the president would be written out.”

Bergdahl was not present in the courtroom and Fidell declined to disclose his client's location to Military.com. The controversial figure was the target of much animus after his return, which was negotiated by the administration of President Barack Obama. Five members of the Taliban who were held at the military detention center in Guantanamo Bay, Cuba, were exchanged for his release.

The search to find Bergdahl, who said he left his post to call attention to problems within his unit, involved thousands of troops and hundreds of hours of drone time. During his trial, military officials said several troops were wounded in firefights that Nance said would not have occurred if Bergdahl had not left his post in Paktika province near the Afghanistan-Pakistan border.

The Army Court of Criminal Appeals judges did not say when they would issue a decision on the Bergdahl appeal. If they find in favor of Bergdahl, they could require a new convening authority or grant clemency. If they side with the government, Bergdahl has the option of appealing to the Court of Appeals for the Armed Forces.

Fidell said he'd like to see a ruling in Bergdahl's favor.

“When the president of the United States is the perpetrator of unlawful command influence, it is very, very important,” Fidell said.