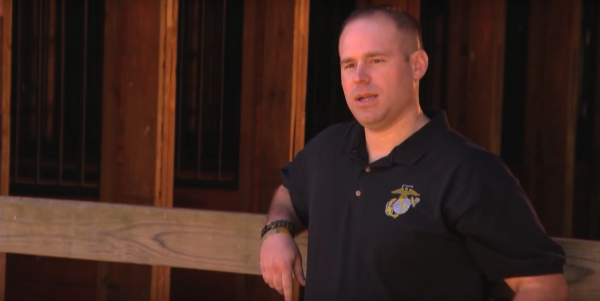 A federal judge on Friday called Brandon Blackstone's actions in faking a war injury to profit financially “shameful, shameful conduct” before sentencing him to 21 months in prison.

Blackstone, 35, a former U.S. Marine from Arlington, also will have to pay the Veterans Affairs department $322,654 in restitution for monthly disability payments he received from November 2006 to December 2015, according to the ruling from U.S. District Judge Barbara Lynn.

He also lied about receiving a Purple Heart and used the fake story to obtain a free house from a veteran's charity.

The Blackstone scheme is the latest in an increasing number of stolen valor cases. Experts say it's rare, however, for veterans who actually served in combat to lie about their wartime experiences for financial or other gain.

And the case achieved some notoriety due to Blackstone's multiple media appearances in which he gave details on camera of being blown up in Iraq by a land mine that were strikingly similar to that of fellow Marine, Casey Owens. In fact, Blackstone left Iraq after a month for a non-combat medical issue and never returned.

Owens, a Houston native, was critically injured and lost his legs when his Humvee hit an anti-tank mine in 2004 in western Iraq, on the Syrian border. He killed himself in 2014 after a decade of suffering from numerous surgeries, brain injury and severe pain.

Owens' sister, Lezleigh Kleibrink, burst into tears after the hearing and said she hoped Blackstone would get more time in prison for stealing her brother's tragic story and using it to profit.

“He caused so much hurt for our family,” she said. “I was hoping for closure, and I got none.”

Lynn said her task was to look at “the whole of you,” and she acknowledged that he appears to have “a lot” of medical problems. But she did not hide her feelings about Blackstone's crime.

“This crime is just completely repulsive and appalling,” she told him.

Lynn said his actions “made a mockery” of everything he's done, and she called it a “betrayal” of his service in the Marines. She said it also “blemishes” those who actually were injured in combat.

“It's beyond the pale,” Lynn said. “Absolutely reprehensible.”

Before his sentence, Blackstone told Lynn he was “truly sorry for all the problems I caused.”

The judge told Blackstone, who has a wife and 7-year-old daughter, that he should make an example of himself and let others know how he “went awry.”

Blackstone's attorney, Justin Sparks, argued that his client had a mental health injury from his war experiences that justified the payments he received from the VA. But Lynn said she saw no evidence of such a disability because no such claim was ever made.

Cara Blackstone, his wife, told the judge he is the “first to volunteer to help anyone” and that he is a good father and husband.

“He has always been there for us,” she said.

Robby Blackstone, his father, asked for leniency and said his family is available to help him.

“When he came back from the military, he was a different young man,” the elder Blackstone said.

Blackstone has been in custody since early February, when he failed a drug test while on pretrial release. He pleaded guilty in October to two felony charges. The second charge falls under the federal Stolen Valor Act of 2013.

“Falsely claiming military honors is disgraceful by itself,” said John Parker, the U.S. attorney in Dallas. “But to do so for financial gain is particularly despicable.”

Eric K. Jackson, special agent in charge of Dallas' FBI office, said Blackstone's conduct was “egregious” and that the bureau will do what it can to uphold the honor those “who truly deserve their military honors.”

“Any fraudulent claim of military valor is disturbing and disrespectful to the brave men and women who earned their honors through courage and sacrifice,” he said.