For the past several weeks, thousands of troops have been waging an invisible war centered around Fort Bragg. And none... 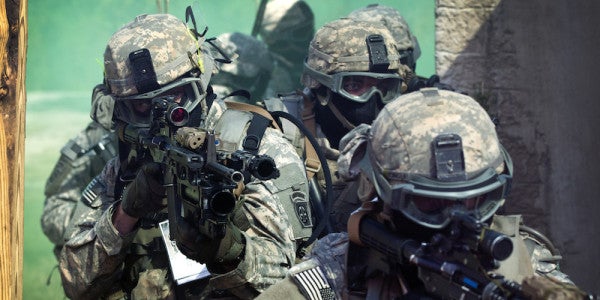 For the past several weeks, thousands of troops have been waging an invisible war centered around Fort Bragg.

And none of them have fired a shot.

Headquarters of the 18th Airborne Corps, 1st Special Forces Command, 3rd Expeditionary Sustainment Command, 4th Infantry Division and the British Army’s 3rd U.K. Division have deployed to training areas to simulate austere environments at or near the front lines of a massive conflict against a near-peer threat.

Warfighting exercises are common across the U.S. Army, often used to validate the training of a division or corps command. But officials said this iteration – which takes place mostly at Fort Bragg but also involves troops at Hurlburt Field, Florida; Fort Leavenworth, Kansas; and Fort Carson, Colorado – is the first of its kind.

The training fully integrates both special operations forces through a Special Operations Joint Task Force, or SOJTF, and a British division working under the 18th Airborne Corps.

In doing so, the training more closely resembles how the Army would fight in a real-world battle, said Brig. Gen. Xavier Brunson, the 18th Airborne Corps chief of staff.

“This is how it is in combat,” Brunson said. “For the past 16 years, we’ve fought alongside these people, day after day.”

But while those operations have been largely focused on fighting insurgencies in Iraq and Afghanistan, the ongoing warfighter exercise is replicating a larger, more complex fight against an advanced enemy involving conventional and irregular forces, with troops deployed to a foreign nation amid an ongoing humanitarian crisis.

British Maj. Gen. N. R. M. Borton, commanding general of the 3rd U.K. Division, said the exercise more closely resembled the fighting of World War II than it does past operations in Iraq or Afghanistan.

“This is really a steep change,” he said Tuesday, from a small outpost of tents, camouflage netting and razor wire built near Holland Drop Zone on Fort Bragg. “That complexity demands a lot more practice.”

The training was more than two years in the making, according to Brig. Gen. Douglas Crissman, an American general who serves as deputy commanding general of the 3rd U.K. Division.

Crissman said officials hoped to make participation in an American warfighter exercise an annual event and have already committed to a similar training exercise next year at Fort Hood, Texas.

“This is a perishable skill,” he said. “It’s not like riding a bicycle.”

Brunson said the training was meant to test the ability of the nation’s contingency corps to deploy quickly in response to a threat somewhere in the world and then manage a complex battlefield.

“It highlights what’s expected of us,” he said. “It keeps the edge honed.”

Officials did not discuss the particulars of the training, which was at least partly based on real-world environments.

And the 3rd U.K. Division is the core land element of the U.K. Joint Expeditionary Force and the only division in the British Army tasked with being ready to deploy at all times.

Col. Josh Walker, chief of staff for the 1st Special Forces Command, said the warfighter exercise was a first for the command. And a great opportunity to improve working relationships between conventional and foreign forces that would operate side-by-side in a combat environment.

“For us, it’s critically important,” Walker said. “We have to train how we fight.”

He said the training helps prepare the headquarters for the future, by highlighting strengths and capabilities and improving relationships with partner forces.

“We’ll build on that for the future,” Walker said.

Over the course of two weeks, the soldiers trained in and out of a virtual environment, conducting base defense and responding at times to mock chemical attacks by layering their uniforms with special protective suits.

Brunson, the 18th Airborne Corps chief of staff, said the corps headquarters has been involved in three other warfighter exercises this year.

But those past training exercises – focused on preparing the 10th Mountain Division, 1st Corps, 101st Airborne Division and 1st Armored Division for future missions – have been at a smaller scale than the most recent training, which involved months of preparation.

The end result was a massive exercise involving not only the U.S. and U.K. armies, but also the American Navy, Air Force and Marine Corps, as well as other governmental partners.

Brunson said for the Army to practice on the same scale in a real-world environment would require 150,000 troops and a sprawling training area that would rival the Louisiana Maneuvers – a series of Army exercises that helped prepare troops for World War II.

As of Tuesday afternoon, the training meant that British Staff Sgt. Alastair Smith had seen little during his visit to America save for a small area of Holland Drop Zone that included a few tents, buildings and a steady stream of military vehicles.

“I haven’t left the compound,” he said.

But getting out of their comfort zones, and away from their homes, was important for the soldiers.

“It tests us,” Smith said. “We’re not always going to fight on the same terrain.”

One of the biggest challenges has been ensuring the British and American forces are able to work together – melding communications and other equipment.

In the months leading up to the exercise, teams on both sides of the Atlantic worked to minimize friction between the headquarters – troubleshooting attempts to link communications and battlefield management systems.

Crissman, the deputy commanding general of the 3rd U.K. Division, said the focus of the exercise is at the higher headquarters. But the benefits can permeate across the two forces.

“For young soldiers in the British Army, this is a great experience,” he said.

He said soldiers have bonded quickly over shared experiences and that camaraderie will go a long way.

Borton, the commanding general of the 3rd U.K. Division, said the unit has American troops embedded into the unit and participates in small unit exchanges. The division has often trained alongside partner nations but has not worked with a corps-level command like this before.

“It’s a big deal for us and a huge opportunity,” he said.

Borton said the exercise represents an acknowledgement that militaries will likely work together on future battlefields.

“It’s unlikely any country will go it alone,” he said. “We have to work and train together.”

He said the two countries are continually learning and striving to improve their partnership.

“This is the way forward,” he said.