Last year, the British Army made headlines when it said it wanted "snowflakes" in its ranks. This year, the Army is calling on social media addicts, binge-drinkers, and anyone else who spends their time desperately searching for a confidence boost, no matter how short-lived it may be 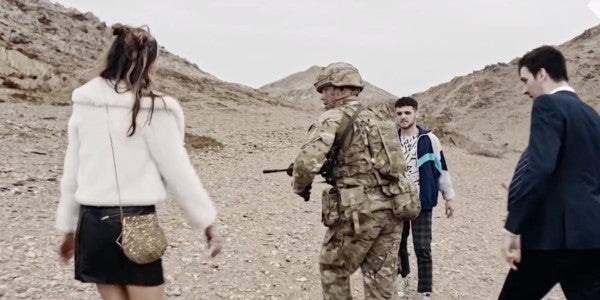 Last year, the British Army made headlines when it said it wanted “snowflakes” in its ranks. This year, it's calling on social media addicts, binge-drinkers, and anyone else who spends their time desperately searching for a confidence boost, no matter how short-lived it may be.

The British Army, as of last fall, was still thousands of troops shy of its target of 82,000 fully-trained troops, with numbers still falling as more troops leave the service among an upswing in recruitment.

In an effort to boost its numbers, the British army is pushing forward with its “belonging” recruitment drive. The latest recruiting campaign, which came out Thursday, has a simple message: “Army confidence lasts a lifetime.”

The video targets people addicted to the gym, bar hopping, social media, and fashion, telling viewers that “lots of things will give you confidence … for a little while, but confidence that lasts a lifetime, there's one place you'll find that.”

The latest campaign is based, at least in part, on research done by The Prince's Trust charity in 2018 that found that roughly 54% of 16-9 to 25-year-olds struggle with self-confidence and believe that this problem keeps them from reaching their true potential.

The British Ministry of Defense, according to The Independent, says that the ongoing recruitment campaign, which began in 2017 amid a steady drop in the size of the British armed forces, has been successful.

Last year's British Army recruitment drive, which controversially targeted “snowflakes,” “class clowns,” “selfie addicts,” “phone zombies,” and “me me me millenials,” reportedly resulted in tens of thousands of people signing up to join. While the force fell short of its annual recruiting goals, it saw the highest number of recruits in a decade start basic training last fall.

“With the 2020 campaign we want to highlight that a career in the Army not only provides exciting opportunities, challenges and adventure but it also gives you a lasting confidence that is hard to find in any other profession,” Col. Nick MacKenzie, the head of the British Army recruitment, said, according to the BBC.

Despite increases in recruitment, a positive change for the British Army, the force continues to face retention challenges that keep it from meeting its ambitions. The British armed forces shrank for the ninth year in a row last year.