A British pilot and a German pilot shot each other down in WWII. Then they became best buds.

Rather than kill one another, the downed crews shared breakfast and decided they would have to cooperate to survive. 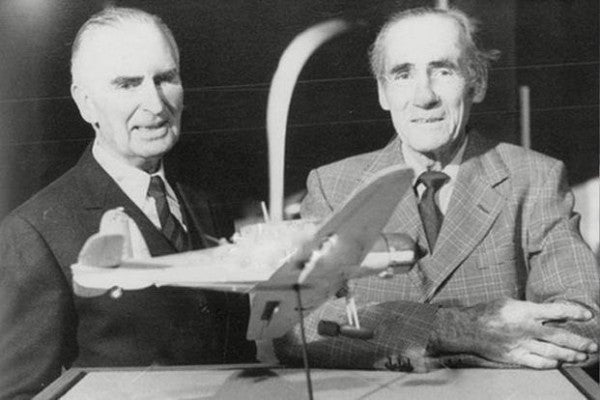 Editor's Note: This article by Blake Stilwell originally appeared on Military.com, a leading source of news for the military and veteran community.

In the early days of World War II, the British were fighting to free Norway from the Nazis. As the pilots of two aircraft fought viciously, they were unaware they were about to make lifelong friends with an enemy.

The aerial fighting took place amid heavy mountain snows between a German Heinkel He 111 bomber and three British B-24 Skua fighters.

Three on one would be difficult for any medium bomber, but the Skuas were just too much. The German aircraft came crashing down in the mountains above a frozen lake. A few minutes later, one of the British Skuas experienced engine failure and made its own emergency landing on that lake.

It was spring 1940, but you'd never know it to look at that remote mountainous area of Norway.

Both the British pilot, Capt. R.T. Partridge, and his radio operator, Lt. R.S. Bostock, survived the rough landing, making their way to an abandoned house that appeared to have once belonged to a reindeer hunter.

Almost as soon as they arrived, they saw three men coming through the heavy snow. They were what was left of the Heinkel bomber crew. They were not happy.

A gun camera view of a dogfight over occupied Norway, ca. 1940.

The British and German crews had both walked through the heavy snow and cold to the now-deserted cabin.

Somehow, the British managed to convince the Germans their plane was not the Blackburn Skua that had shot down their aircraft, but rather a Vickers Wellington bomber that was shot down by the Luftwaffe.

That was, of course, a lie. But the Germans were armed with pistols and knives, and the truth would literally hurt. Eventually, they came to a general agreement. The Germans could take the hut; the British would continue on in the snow. No one else had to die that day.

The two British airmen made their way to the town of Grotli, a summer vacation resort that was currently devoid of people. Breaking into a hotel, the two men managed to pass the night in relative comfort.

When morning came, so did the Germans.

Rather than kill one another, the crews shared breakfast and decided they would have to cooperate to survive their situation. They were both far from their lines and had no way to communicate. No one knew to come look for them. If they didn't work together, they would all die there.

Partridge and German Sgt. Karl-Heinz Strunk soon headed out to scout the area, look for other people and see whether there were populated towns anywhere close by.

Almost immediately, in full view from the abandoned hotel, they encountered a Norwegian ski patrol. A patrolman fired a warning shot at the duo, and Partridge threw his body on the ground. Strunk put his hands on his head.

Bostock, the British radioman, emerged from the hotel just in time to see Strunk reach for his pistol and be shot by the Norwegians.

The other two Germans, pilot Capt. Horst Schopis and mechanic Joseph Auchtor, were captured and sent to the nearby town of Stryn as prisoners of war. They would eventually end up in Canada, where they spent the duration of the war.

Partridge and Bostock were able to convince the ski patrol they were allies by showing them British currency. The two then had to link up with British Marines by hiking to Ålesund, where they were then forced to steal a car to meet the HMS Manchester to return to England.

Once in England, the two airmen were returned to service, taking part in an air raid near Trondheimsfjord, where Bostock was killed and Partridge was shot down and captured, spending the rest of World War II in a Luftwaffe POW camp.

Both Partridge and Schopis survived the war, being prisoners, and went on to write books about their experiences. Decades later, Partridge called Schopis, and the two would meet several times over the years, notably in one another's hometowns of London and Munich.

The two reunited for the last time in the city of Grotli in 1974, where the abandoned hotel they had once commandeered for breakfast stood. Schopis returned by himself in 2004, 14 years after Partridge died. Schopis died in 2011 at age 99.

Their story was turned into the 2012 film “Into the White,” starring Rupert Grint in the (renamed) Bostock role.