English soldiers are fighting the Battle of the Bulge 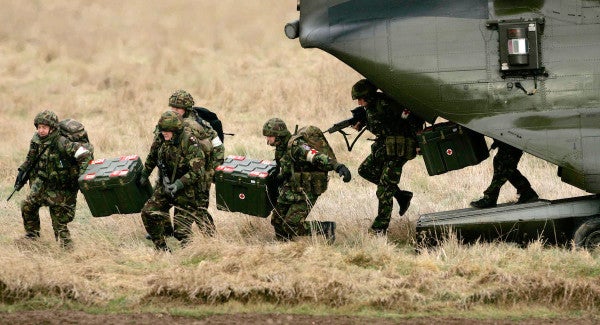 English soldiers are fighting the Battle of the Bulge.

Obesity was on the menu at the House of Lords Monday where British leaders bemoaned the fact they may have to alter war machines to accommodate their growing military.

“By far and away the most serious eating disorder is the obesity epidemic which is now impinging upon the armed forces,” Lord McColl of Dulwith reportedly told his colleagues.

“Ejector seats in fighter planes are having to be modified because of obesity,” he added, according to MSN.

According to McColl, England's obesity issues could even impact the Royal Navy.

“We may have to enlarge the escape hatches of submarines to allow (overweight sailors),” he added.

Nearly 18,000 members of the British armed forces are clinically obese, according to an October report on Forces.net. That same data showed 30,000 troops in the UK are overweight and many troops have treated their weight issues with diet pills or liposuction.

Extreme portliness was most common among Army soldiers, where the obesity rate was nearly that of Royal Navy and Royal Air Force members combined. The Guardian reported in November that the Brits may lengthen its training period for recruits because “two-thirds of teenagers (are) too fat to be soldiers.”

British Health Minister Nicola Blackwood of North Oxford agreed with McColl's larger point, but didn't want to blame the military for overdoing the fish and chips.

“While I don't feel able to comment on ejector seats or submarine hatches… I do believe that obesity is a serious issue,” Blackwood said.

Fitness among military personnel is an issue in the United States, too, where a 2018 Rand report showed nearly two-thirds of U.S. troops to be overweight or obese. The Army was also the most obese branch of the U.S. armed forces.