Following in the wake of the U.S. Navy, a British warship recently challenged China's excessive claims to the disputed South... 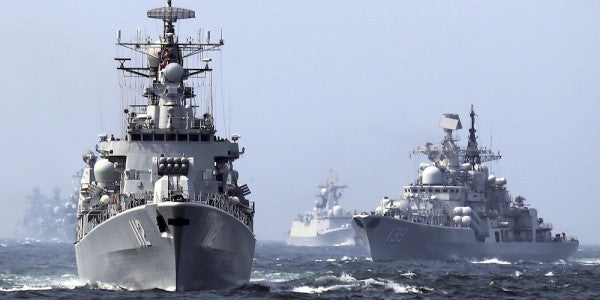 Following in the wake of the U.S. Navy, a British warship recently challenged China's excessive claims to the disputed South China Sea, provoking a confrontation with the Chinese military and triggering outrage in Beijing.

The warship HMS Albion, an amphibious assault ship carrying a contingent of Royal Marines and one of three Royal Navy surface ships deployed to Asian waters this year, was confronted by the Chinese navy — a frigate and two Chinese helicopters — when it sailed close to Chinese-occupied territories in the Paracel Islands in late August, Reuters reports. The Chinese navy instructed the British vessel to leave the area, and the situation did not escalate further.

“HMS Albion exercised her rights for freedom of navigation in full compliance with international law and norms,” a spokesman for the British Royal Navy said in response.

“The relevant actions by the British ship violated Chinese law and relevant international law and infringed on China's sovereignty,” the Chinese Ministry of Foreign Affairs said in an official statement. “China strongly opposes this and has lodged stern representations with the British side to express strong dissatisfaction.”

“China strongly urges the British side to immediately stop such provocative actions, to avoid harming the broader picture of bilateral relations and regional peace and stability,” the ministry added. “China will continue to take all necessary measures to defend its sovereignty and security.”

The U.S. military conducts regular “freedom of navigation” operations in the contested South China Sea, often sending both warships and bombers past contested territories in the area, and Washington has been pressing allies and international partners to push back on Chinese efforts to dominate the strategic waterway.

London appears to be answering Washington's call, and China may be particularly upset because it could encourage other states to do the same.

Related: The US Navy Just Sent A Message To Russia And China With Major Shows Of Force »

Last week, the U.S. Navy and the Japanese Maritime Self-Defense Force conducted joint military exercises in the South China Sea, putting on a show of force with aircraft carriers and other weapons systems in China's backyard.

Gavin Williamson, the British defense secretary, stressed in June that the deployment of the HMS Albion and other vessels to the region sends the “strongest of signals” on the importance of freedom of navigation. “We believe that countries should play by the rules,” he said in a clear message to China the day after U.S. Secretary of Defense Jim Mattis slammed China for “intimidation and coercion” in the South China Sea.

Increased pressure by the U.S. and Britain has yet to curb Beijing's ambitions in the waterway, through which trillions of dollars in trade pass annually.

Over the past year, China has significantly increased its military presence in the region by deploying jamming technology, anti-ship cruise missiles, and surface-to-air missiles at its outposts in the South China Sea. Chinese bombers have also become much more active in the area.

The Chinese military, arguing that it is defending Chinese territory, regularly threatens foreign ships and aircraft that get too close, and confrontations are not uncommon. Neither the US Navy nor other countries in the flashpoint region have allowed China's threats and warnings to affect their operations.

The Chinese Ministry of National Defense said Thursday it will continue to dispatch ships and planes to confront “countries outside the region” that “continue to send warships to the South China Sea to stir up trouble.”