Editor’s Note: This article by Hope Hodge Seck and Matthew Cox originally appeared on Military.com, the premier source of information for the military... 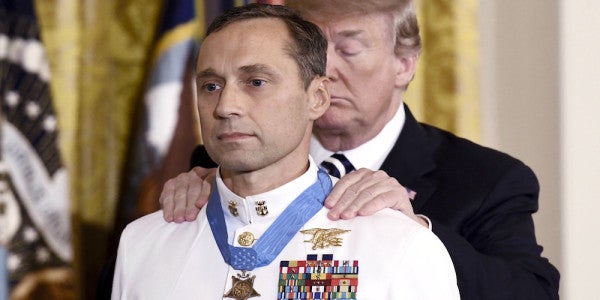 Editor’s Note: This article by Hope Hodge Seck and Matthew Cox originally appeared on Military.com, the premier source of information for the military and veteran community.

Slabinski is credited with risking his life to lead a rescue attempt for a fellow SEAL, Petty Officer 1st Class Neil Roberts, during a snowy mission atop a 10,000-foot peak, Takur Ghar, in Afghanistan. The fight, which cost the lives of seven service members including Roberts and left 20 more wounded, would become known as the Battle of Roberts Ridge.

“Today, we induct a new name into the most exclusive gathering of heroes,” President Donald Trump told a crowd assembled in the East Room of the White House.

President Donald Trump awards the Medal of Honor to Master Chief Special Warfare Operator Britt K. Slabinski during a ceremony in the East Room of the White House in Washington, Thursday, May 24, 2018.Associated Press/Susan Walsh

Among those in attendance were five Medal of Honor recipients, including Senior Chief Special Warfare Operator Edward Byers, a SEAL who received the medal for heroism in Afghanistan in 2016 and continues to serve on active duty.

Also present were seven members of Slabinski's team from the 2002 battle in Afghanistan, who stood while Trump applauded them.

The president described the battle and how Roberts had been forcibly ejected from an MH-47 helicopter after it was hit by rocket-propelled grenade fire. When Slabinski received word that Roberts might still be alive, he was confronted with a dilemma.

“The team faced a choice: to wait for reinforcements and pretty much safety, or to return immediately to the enemy stronghold in the hope of saving Neil's life,” Trump said. “They would be outmanned, outgunned and fighting uphill on a steep icy mountain, and every soldier knows you don't want to fight uphill.”

“The odds were not good, but Britt and his team didn't hesitate for a moment,” he said.

Related: Operators Are Bitterly Infighting Over The Latest Medal Of Honor Announcement »

He applauded for several seconds as family members of the fallen service members stood.

Trump noted that Slabinski wanted the medal to recognize not only himself, but his whole team.

“We are free because warriors like you are willing to give their sweat, their blood and, if need be, their lives for our nation,” Trump said. “Britt, we salute you. We thank God for making you a Navy SEAL.”