As America reels from the horror of the mass shooting in Las Vegas, retailers are taking proactive steps. An area of... 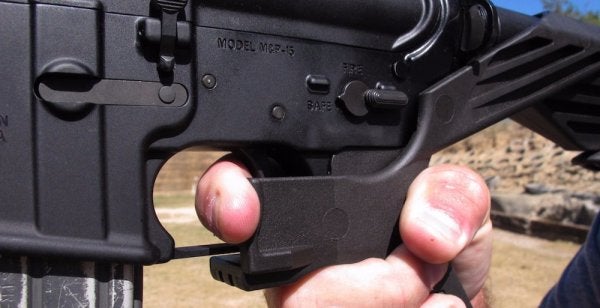 As America reels from the horror of the mass shooting in Las Vegas, retailers are taking proactive steps.

An area of focus in the investigation is how Stephen Paddock was able to shoot so fast without the use of an automatic weapon. The answer is something called a bump stock, or a bump fire stock, according to the Associated Press.

Bump stocks replace the stock of a weapon and use the gun's recoil to move the gun back and forth, shooting faster than trigger-depressing usually allows.

Congress is considering action that would ban the use of a bump stock, but bump stocks have already become a hot-button issue for many — and retailers are now staying away.

Hunting outfitter Cabela's previously offered the Slide Fire bump stock for sale on its website, but that listing has been taken down. Google's cache of the product is broken, and clicking on the product page that shows up in Google's search results now redirects to the general firearms page. Previously, it showed a “page not found” error.

Bump stocks are a relatively new device, as they've only been around for a decade or so. In 2010, they were found not to be in violation of a federal law that banned automatic weapons, according to NBC News. They were considered a novelty, as the rapid firing also greatly decreased accuracy.

Slide Fire, the company that makes the industry-leading version, according to the Associated Press, sells the device for about $200, depending on what gun it is designed to be affixed to. Officials did not reveal who made the version the Las Vegas shooter used.

A version of the bump stock was previously available for sale by a third-party seller on Walmart's website for an unknown period of time, but the retailer has pulled the listing.

A Walmart spokesperson told Business Insider: “These items, which were sold by third-party sellers on our online marketplace, violate our prohibited items policy and never should have been sold on our site. They were immediately removed.”

Increased scrutiny around bump stocks isn't dampening demand, however. Slide Fire posted on its website Wednesday: “Due to extremely high demands, we are currently out of stock.”