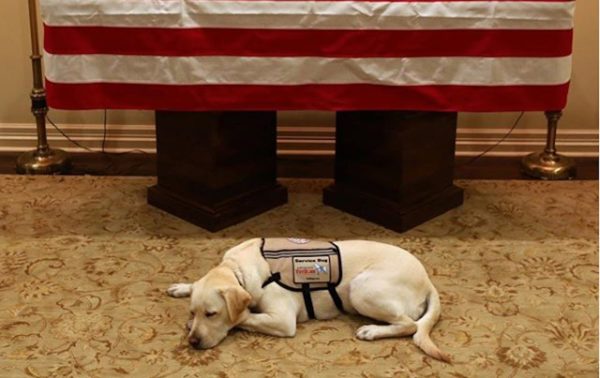 A photo of President George H.W. Bush's service dog lying downbeat beside the casket of his old master on Sunday has spread across social media, causing an outpouring of emotion.

Bush's son Jeb, the former Florida governor, retweeted the photo with the simple words “Sully has the watch.”

The actress Olivia Munn shared the photo, saying: “This is his pup Sully, lying beside him til the very end. Thank you for your service, Mr. President.”

The Fox News host Bret Baier tweeted: “That is just a great pic of Sully the service dog who served @GeorgeHWBush Wow.”

Sully started serving as Bush's companion in June after Bush's wife, Barbara, died in April. Sully will reportedly make one last journey with the 41st president.

Sully is expected to accompany Bush's casket to Washington, DC, on Monday afternoon, a source told CNN. Bush's body is scheduled to lie in state at the US Capitol from 5 p.m. on Monday until 10 a.m. on Wednesday.

Before that his remains will be taken to Ellington Field Joint Reserve Base in Houston and then to Joint Base Andrews in Maryland, ABC said.

“As much as our family is going to miss this dog, we're comforted to know he'll bring the same joy to his new home, Walter Reed, that be brought to 41,” Bush, the 43rd president, said.

The service dog is named after Chesley “Sully” Sullenberger, the US Airways pilot who safely landed a passenger plane on the Hudson River outside New York City in 2009.

The elder Bush died Friday at 94. He had a form of Parkinson's disease and was hospitalized periodically in recent years for pneumonia.