Astronaut Buzz Aldrin will be taking his moon walk to the streets of New York City for the annual Veterans... 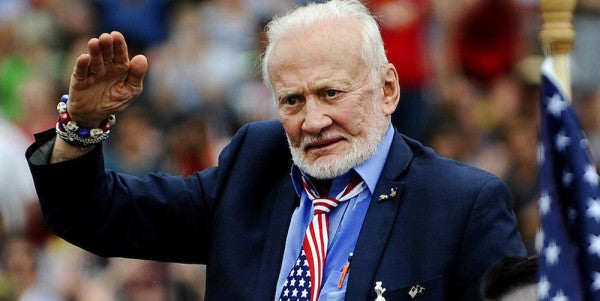 Astronaut Buzz Aldrin will be taking his moon walk to the streets of New York City for the annual Veterans Day Parade.

Aldrin, a U.S. Air Force veteran of the Korean War, was chosen as the grand marshal for the 2017 parade by the United War Veterans Council on Wednesday. The announcement came during the same week that the nation celebrated the 48th anniversary of the Apollo 11 lunar landing on July 20, 1969.

“I’m proud and honored to lead the Veterans Day Parade. I took an oath at the age of 17 at West Point to serve my country and everything I do is in service to our country that to this day,” Aldrin said. “I think it’s important to remind the world of the value of service and having pride in one’s military career and the value that veterans bring to society. I’m very proud to be a veteran and proud to stand with our vets to get them the credit and support they deserve.”

Douglas McGowan, chairman of the United War Veterans Council, said it was an honor to have a “great American hero” lead the parade.

“Col. Buzz Aldrin is the living embodiment of the U.S. Air Force motto – Aim High. From the skies over Korea to Tranquility Base, where Col. Aldrin made his historic moonwalk 48 years ago this week, he has inspired generations around the world to reach for the stars,” McGowan said.

The U.S. Air Force, which marks its 70th anniversary this year, is the featured military service for the 2017 parade.

About 40,000 people will march up Fifth Avenue, from 26th to 52nd streets, during the 99th annual Veterans Day Parade on Saturday, Nov. 11, 2017. A crowd of around 500,000 is expected to cheer on the veterans, active duty military personnel, marching bands and support groups participating in the parade.

The parade steps off at 11 a.m., but first the United War Veterans Council will host a memorial ceremony, which includes a wreath-laying, flag-raising, 21-gun salute and the playing of “Taps,” at 10 a.m. in Madison Square Park near the Eternal Light Flagstaff.

The parade will also be broadcast on WPIX-TV 11 and the American Forces Network from noon to 3 p.m., and will be available to stream online at PIX11.com, TaskandPurpose.com and Military.com.