Air Mobility Command has grounded the C-5 Galaxy cargo planes operating at Dover Air Force Base in Delaware after the... 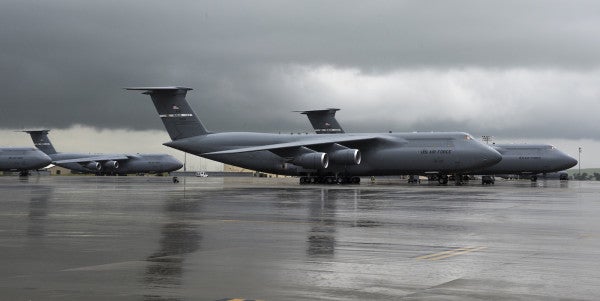 Air Mobility Command has grounded the C-5 Galaxy cargo planes operating at Dover Air Force Base in Delaware after the second malfunction of a nose landing-gear unit in the past 60 days.

The stand-down order, issued on July 17, affects all 18 C-5s stationed at Dover — 12 of them are primary and six are backup aircraft, according to a release.

The Air Force currently has 56 C-5s in service.

“Aircrew safety is always my top priority and is taken very seriously,” Air Mobility Command chief Gen. Carlton D. Everhart II said in a release. “We are taking the appropriate measures to properly diagnose the issue and implement a solution.”

The C-5 is the Air Force's largest airlifter, standing 65 feet long and 247 feet long with a 223-foot wingspan. The first version, the C-5A, entered service in 1970, and several models have joined the fleet since then.

The most recent model, the C-5M, featured more powerful engines allowing it to carry more cargo and take off over a shorter distance. It can haul 120,000 pounds of cargo more than 5,500 miles — the distance from Dover to Incirlik airbase in Turkey — without refueling. Without cargo, its range is more than 8,000 miles.

Everhart, the Air Mobility Command chief, said in Marchthat total C-5 inventory had fallen to 56 from 112 a few years ago.

But the Air Force has made moves to reverse that deactivation, saying it planned to move at least eight mothballed C-5Ms back into service, using newly allocated funds, over the next four years.

That return to service would partially overlap with an upgrade project for the current active fleet of airlifters slated to wrap up in 2018.

“I need them back because there's real world things that we've got to move, and they give me that … added assurance capability,” Everhart told lawmakers at the end of March.