An Air Force Reserve C-5M Super Galaxy cargo plane made an emergency landing at Joint Base San Antonio-Lackland on Thursday... 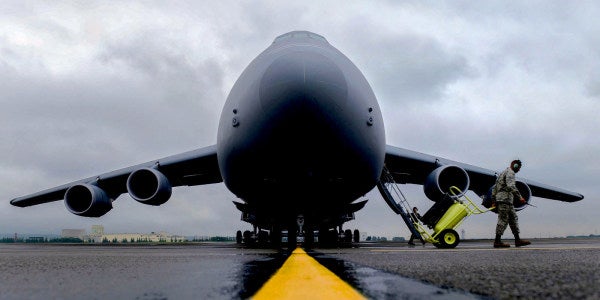 An Air Force Reserve C-5M Super Galaxy cargo plane made an emergency landing at Joint Base San Antonio-Lackland on Thursday afternoon when its nose gear malfunctioned, according to a release.

The crew, which was on a local training mission, discovered the nose gear was not lowering as they returned to base and declared an in-flight emergency, according to the San Antonio Express-News. The crew included pilots, flight engineers, and loadmasters.

The plane landed on its nose and skidded about three-quarters of the way down the runway, according to Air Force Times.

“It's very close to the Boeing hangars, so it used the majority — I would say — half of the runway,” Maj. Timothy Wade, a spokesman for the 433rd Airlift Wing at JBSA-Lackland, told the Express-News.

Wade couldn't say how badly the aircraft was damaged, but none of the 11 personnel on board were injured. Wade told Air Force Times that the cause of the nose-gear failure was under investigation and that it was the first such incident within the wing.

“The Joint Base San Antonio-Lackland first responders did an amazing job in assisting the aircrew and securing the immediate area,” he added.

Related: The Air Force’s Largest Plane Is Getting Pulled From The Flight Line After Another Malfunction »

The Air Force Reserve wing flew C-5A Galaxy model until June 2016, when it started receiving the C-5M. It now has eight of the Super Galaxy. The wing's training squadron, the 733th Training Squadron, and its instructor squadron, the 356th Airlift Wing, regularly do training missions over the area in C-5s.

The C-5 Galaxy is the largest plane in the Air Force. It is 65 feet high, 247 feet long, and has a 223-foot wingspan. The C-5M model, which first deployed in 2009, featured more powerful engines that allowed it to haul more cargo with less room needed for takeoff.

Senior Air Force officials decided to call a number of C-5Ms back to active duty in summer 2017, after budget cuts had led the service to move them into backup inventory, which meant the service still had the planes, but no funding or personnel to operate them, Air Mobility Command chief Gen. Carlton Everhart said in spring 2017.

Everhart also said at the time that the Air Force C-5 inventory had fallen from 112 C-5s a few years prior to 56 now.

Air Force officials planned to start a multiyear process to bring the massive planes back to the flight line.

A few weeks after that announcement, the C-5 fleet encountered more trouble, when Everhart ordered a stand down for all 18 C-5s at Dover Air Force Base in Delaware after two of them had landing-gear malfunctions within a 60-day period. The problems occurred while the planes were deployed to Naval Station Rota in Spain.

The order also included a policy restricting kneel operations on C-5s — which allow the plane to be lowered to ease loading and unloading — to mission-essential requirements only.