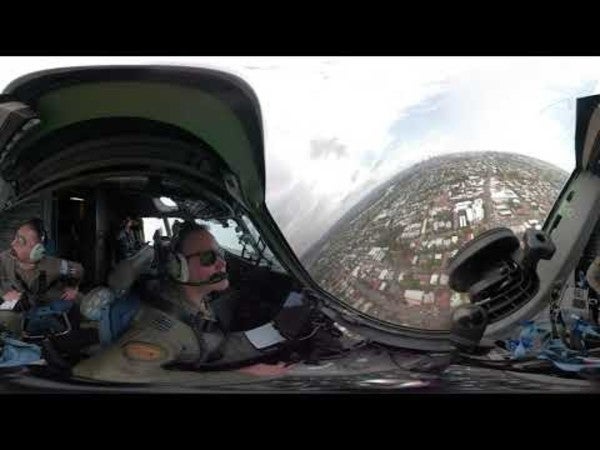 “Holy shit,” pretty much sums up my reaction to the recent footage of Royal Australian Air Force pilots zooming past skyscrapers in a C-17A Globemaster as the words “terrain, terrain, terrain,” and “obstacle ahead” blare over the intercom in the cockpit.

The 360-degree cockpit footage was posted to the Royal Australian Air Force's official YouTube page on Friday along with a series of impressive photos showing the not-so-lumbering beast of a plane flying over (like, just barely over) Brisbane, Australia ahead of a recent airshow.

Yes, that was just a rehearsal.

This impressive clip isn't the only footage of the flight. A similar video, posted to Instagram by 9News reporter Rob Morrison offered a glimpse from the other side of the cockpit — you know, the one nearest to the buildings. (Click to the right on the Instagram post for Morrison's video.)

Despite the size of the C-17, it certainly can move. As The War Zone's Tyler Rogoway noted in a recent post, the RAAF frequently puts its heavy transport planes through their paces during similar low-flying training missions and public performances.

“The C-17A will conduct passes over the Brisbane River and the [Central Business District] as the pilots expertly maneuver the aircraft as part of the preparation for Riverfire display,” the RAAF said in a statement, referring to this past weekend's Sunsuper Riverfire festival and flight demonstration, which included flyovers from some Super Hornets as well.

“Each flying display is planned and flown beforehand and the pilots train to a high skill level to perform such maneuvers,” the statement continues. “The aircraft will be at least 100 meters clear of terrain or any buildings during the display. The flying display will provide the public a great opportunity to take photos of the aircraft.”