To Save Millions, The Air Force Grounds Planes Worth Billions

The Air Force has grounded a big portion of its newly refurbished, multibillion-dollar fleet of C-5 Galaxy transport planes, just... 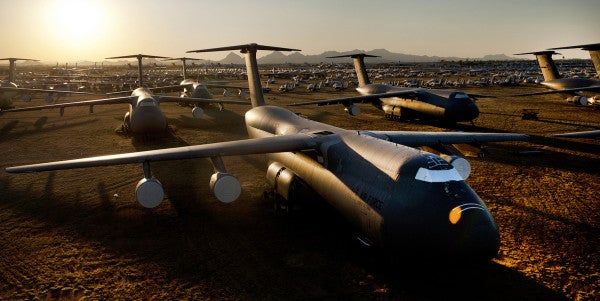 The Air Force has grounded a big portion of its newly refurbished, multibillion-dollar fleet of C-5 Galaxy transport planes, just to avoid spending the relatively small amount of money it costs to fly them.

In order to save $60 million in annual operating costs, the Air Force has since fiscal 2015 placed eight of its top-of-the-line C-5s in “backup aircraft inventory” status, even though they are needed to ferry troops and gear around the world, said Gen. Carlton Everhart, the four-star chief of Air Mobility Command.

The gargantuan planes, among the largest on the planet, “sit on the ramp” at two Air Force bases, one in California and the other in Delaware, Everhart said in an interview. Periodically, their engines are run or they’re moved around, he said. But the eight planes in the backup inventory have not flown for nearly three years — even though they collectively cost more than $2 billion.

When the eight planes that have been grounded merely to save money are combined with four more that are kept in reserve for emergencies under standard procedures, that means nearly a quarter of the latest C-5 aircraft, the M models, are out of service.

Everhart said it was a “budget decision” to ground the eight extra planes, and he hopes the funding will be restored soon to bring them back into the active fleet.

“It’s not the most perfect system,” he said of the Pentagon budgeting process.

Virginia Republican Rob Wittman, chairman of the House Armed Services panel that oversees transport aircraft, said this week that the C-5 policy is the product of budget constraints that should be lifted.

“The American people should get the most out of the hard-earned tax dollars that went into modernizing these aircraft,” Wittman said.

Representatives of taxpayer groups agree that grounding the best cargo planes money can buy makes no sense, as long as they are needed, but some analysts believe the Air Force can shift money from less important programs to cover the cost of operating the C-5Ms.

“The Air Force has the economics upside down here,” said Steve Ellis, vice president of Taxpayers for Common Sense, in a statement. “If they can truly get by on 75 percent of the fleet, why did the taxpayer spend billions of dollars on excess capacity? We’re all for cutting costs, but do it in smart way, starting with reducing the F-35 buy, or better yet, buy more F-16s instead to bridge the technological gap to more capable UAVs (Unmanned Aerial Vehicles). Or close some of that excess base capacity.”

Mark Thompson, an analyst with the Straus Military Reform Project at the Project on Government Oversight’s Center for Defense Information, said in an email that the Pentagon often turns to its operations accounts to save money.

The operations budget “lacks the constituency that upgrading the C-5 has — both inside the Pentagon and on Capitol Hill,” Thompson said. “So, given that choice, it’s not surprising that the Air Force would improve the airplanes only to let them sit on the tarmac. It is penny-wise and pound-foolish.”

Each mammoth C-5 is capable of carrying enormous sums of cargo — for example, two tanks or six attack helicopters. Refurbished recently with more powerful engines and enhanced cockpit computers, the C-5Ms are the only U.S. transport planes that can make a nonstop transcontinental flight, officials say.

“The C-5M assures American presence on the ground within hours not days,” said Col. Christopher Karns, a spokesman for Air Mobility Command.

And what is left in the C-5 fleet has been shrunk further because of the groundings.

Of the 56 C-5s in the inventory today, 52 are the upgraded C-5M’s, while the other four are aging C-5A’s that will soon be retired.

Within the C-5M’s, four are in the backup aircraft inventory in order to provide a surplus in case other planes in the fleet are sidelined, as when major maintenance work is due. Placing those four planes in backup status is standard procedure.

Not typical, however, was the addition of eight more planes into the backup inventory, officials said.

Without the full fleet in action, the wear and tear on the remaining 77 percent of the planes that are in use is too great, Everhart said. The remaining planes are flying more than planned, he said. Their reliability rates are too low. And Air Force personnel are overworked flying and maintaining them.

“I need them back,” Everhart said of the eight C-5s in caretaker status.

Demand for this reduced fleet of large transports is likely to grow, officials say. The military services, after reducing their active duty personnel numbers as the post-9/11 wars wound down, are now ramping back up the number of men and women in uniform. And military operations are beginning to pick up against the Islamic State and in other regions.