"March Air Reserve Base and the DoD stand ready to provide housing support to Health and Human Services (HHS) as they work to handle the arrival of nearly 200 people." 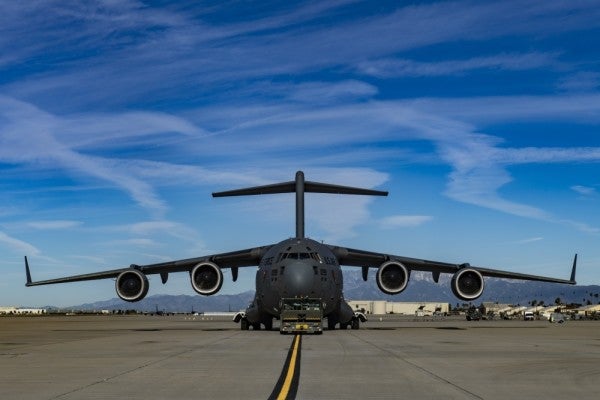 “March Air Reserve Base and the Department of Defense (DoD) stand ready to provide housing support to Health and Human Services (HHS) as they work to handle the arrival of nearly 200 people, including Department of State employees, dependents and U.S. citizens evacuated from Wuhan, China,” said Pentagon press secretary Alyssa Farah in a statement on Wednesday.

Wuhan is the epicenter of the coronavirus, which is a mild to severe respiratory illness that’s associated with symptoms of fever, cough and shortness of breath, according to the Centers for Disease Control and Prevention.

The Americans left China on Tuesday and touched down in Anchorage, Alaska late Tuesday night, according to CNN. The passengers are now en route to March ARB just over 60 miles outside Los Angeles, California.

Farah said HHS is in charge of caring for the evacuees and screening them for symptoms of the virus.

“DoD personnel will not be directly in contact with the evacuees and evacuees will not have access to any base location other than their assigned housing,” Farah said. “Should routine monitoring of the evacuees identify ill individuals, HHS has procedures in place to transport them to a local civilian hospital.”

Evacuation or no, coronavirus has already reached American shores. At least five cases of the illness have appeared in the United States, according to the Washington Post, and several dozen others have appeared on nearly every continent save South America.

Still, U.S. officials are urging calm in the face of the outbreak. Secretary of State Mike Pompeo told reporters on Wednesday morning that the U.S. does not want “to react in a way that actually has the potential to make things worse and not better.”

“[T]here are enormous efforts underway by the United States government to make sure that we do everything we can to protect the American people and to reduce the risk all around the globe,” he said.

Though investigations into the transmission of the virus are ongoing, CDC said it believes coronavirus is spread “via respiratory droplets produced when an infected person coughs or sneezes, similar to how influenza and other respiratory pathogens spread.”

Though there is no vaccine for coronavirus yet, the CDC says that the best way to prevent infection is to follow everyday preventive actions such as the following:

If you were in China the last 14 days and feel sick with fever, cough or difficulty breathing, the CDC says you should do the following: