Members of the Guard described a "climate of retaliation...and mistrust." 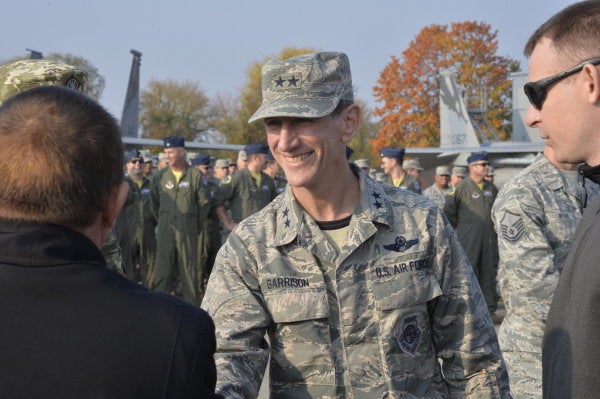 The head of the California Air National Guard and one of its five wing commanders have been removed from their positions amid complaints of reprisals against whistleblowers and allegations of a cover-up of misconduct that reached into the highest ranks of the organization, officials announced Friday.

Maj. Gen. Clay L. Garrison, the top commander of the 4,700-member air guard, was dismissed for being unable to “maintain a positive command climate,” said Lt. Col. Thomas Keegan, spokesman for the California Military Department. Keegan said the department had lost “faith, trust and confidence” in Garrison's ability to lead.

In a report released after the ousters of Garrison and Col. Dan Kelly, the commander of the 144th Fighter Wing in Fresno, the Military Department inspector general cited findings of a Times investigation two months ago that detailed the whistleblower allegations. The complaints disclosed by The Times focused on the leadership of the Fresno base and included an alleged cover-up of an incident in which someone urinated in a female Guard member's boots.

“Based on this article, and in addition to other evidence collected, it would appear that there is a culture of reprisal, or at a minimum the perception of reprisal, that has a long stemmed history within the 144th,” the inspector general report states.

Brig. Gen. Gregory F. Jones, who has served as an assistant adjutant general in the Guard since December 2017, was appointed to replace Garrison. Col. Jeremiah Cruz was named Kelly's interim replacement.

Jones was unavailable for comment, Keegan said. Garrison and Kelly did not respond to interview requests.

Keegan said Garrison will retire in the coming weeks. Kelly's future in the Guard has yet to be determined, Keegan said.

Maj. Gen. David Baldwin, who oversees both the air and army branches of the California Guard as adjutant general of the Military Department, was unavailable for comment, Keegan said.

In interviews with The Times, several current and former members of the Guard have described a climate of retaliation by high-ranking officers and mistrust in the organization's inspector general system intended to hold them accountable. At least five Guard members from the 144th wing, including a pilot who was killed in October in a crash during a training mission in Ukraine, filed formal complaints.

The urine incident and its aftermath fueled suspicions that high-ranking officers, including Garrison, mishandled two investigations to find the perpetrator and tried to bury the episode to protect someone who may have been involved, according to interviews and Guard records obtained by The Times. Some in the wing refer to the scandal as “Pissgate.”

The saga dates to March 2015, when Staff Sgt. Jennifer Pineda, a 15-year veteran of the Guard, was about to change into her uniform in a women's bathroom at the 144th Fighter Wing when she discovered her boots had been soiled. Reached by phone Friday, Pineda said, “At this time, I don't have a comment.”

Maj. Dan Woodside, a retired 144th fighter pilot who is a witness in an inspector general's Pineda investigation and has complained about how she was treated, said Guard members were afraid to approach Garrison with any reports of wrongdoing, fearing they would be punished.

“Pissgate was just one example,” Woodside said. “Gen. Garrison did not act alone in this…. It all happened under his watchful eye, but he was not alone in allowing this to happen.”

After The Times began asking questions about the Pineda episode, the military department asked the U.S. Air Force Inspector General's Office to conduct an investigation — the third into the Pineda incident. Keegan said Friday he did not know the status of the probe. That inquiry is part of a broader investigation into whether whistleblowers at the 144th suffered reprisals for questioning the actions of their superiors on a range of matters.

The California air guard is the second largest, after New York's, in the Air National Guard, which is a force of more than 100,000 pilots, other officers and enlisted people. Many of the pilots are part-time reservists, signing up after careers in the U.S. Air Force, and some fly in their civilian lives for commercial airlines.

The guards function as state militias whose leaders report to their respective governors. The 144th is the biggest wing in the state, home to roughly 115 officers, including about two dozen fighter pilots, and more than 1,000 enlistees in support units.

A spokesman for Gov. Gavin Newsom referred questions about Friday's shakeup back to the Guard.

Members of the 144th's security forces, who police the base, conducted two investigations into the Pineda incident, according to internal investigative records obtained by The Times. Both were inconclusive and the case was closed.

Pineda filed a whistleblower complaint, in which she wrote that she feared she'd be forced out of the military because some had speculated that she urinated in her own boots “for attention.”

A 144th pilot, Lt. Col. Rob Swertfager, also filed a complaint alleging that commanders punished him — including by withholding his pay on occasion — for going to bat for Pineda.

Col. Dave Johnston, a commander who signed off on the evidence destruction, said in statements provided to The Times that he had consulted with Garrison before doing so. Garrison ran the base at the time of the incident.

Garrison's only guidance, Johnston wrote, was that he first confer with the 144th's judge advocate general at the time. She also signed off on the request to discard the evidence.

Dave Bakos, a retired general who served in the Guard for 32 years and was deployed to Iraq and Afghanistan, was among those who said Garrison should have demanded a more thorough investigation from the start.

“It's unfortunate that the young people in the California Air National Guard, our citizen soldiers, have to witness this type of activity that's occurring at the top,” Bakos said Friday. “They deserve better.”

He said the Guard now has “an opportunity to get a fresh start with new leadership.”

Jones began his career as a jet engine mechanic in the Nevada Air National Guard. In California, he held various positions at the 146th Airlift Wing at Port Hueneme before heading the 129th Rescue Wing in the Mountain View area.

In a statement Friday, Keegan said, “The Guard is committed to providing a transparent, respectful and positive command climate.… I am confident that Brig. Gen. Jones will be able to lead the organization effectively and with the utmost integrity.”

SEE NEXT: Who urinated in her boots? A mystery at a California military base led to claims of a cover-up