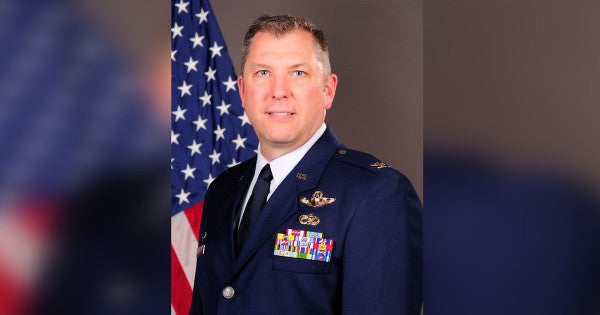 A third high-ranking officer in the California Air National Guard has been removed from his position because of complaints he made whistleblowers feel threatened at the 144th Fighter Wing in Fresno.

Col. Victor Sikora was relieved of command after engaging in “conduct unbecoming of an officer” by addressing a gathering of Guard members in a manner some found intimidating and humiliating, according to a report released Friday.

An internal inquiry also determined that Sikora improperly “excoriated” a retired pilot for speaking to The Times, the report said.

Sikora did not respond to requests for comment Friday.

Last week, Maj. Gen. Clay L. Garrison and Col. Dan Kelly were removed in the wake of a Times investigation that detailed the whistleblower complaints and allegations that officers covered up an incident in which someone urinated in a female Guard member's boots.

Garrison was the top commander of the air guard, and Kelly headed the 144th wing.

Friday's report said that Sikora's “conduct also had a chilling effect” on Guard members by discouraging them from exercising their rights to seek redress through the organization's inspector general, their representatives in Congress or the news media. It said Sikora used insulting and defamatory language in remarks to subordinates.

The report was prepared by Brig. Gen. Tim Rieger, who was tasked by Maj. Gen. David Baldwin, head of the California Military Department, with investigating Sikora's actions.

Sikora was suspended as the wing's Operations Group leader in December. Three days later, the report said, he called a mandatory meeting of his subordinates to discuss his suspension.

At least one person recorded the briefing, where Sikora said anyone filing complaints was causing problems for the wing, according to the report.

“The vast majority of you are good people who are killing it in a high ops tempo year, you're very honorable, red-blooded Americans,” Sikora said at the meeting, according to the report. “The vast majority means all of you, except for a couple of you, and they know who they are so we don't need to call them out. But everybody else.”

Several Guard members took Sikora's remarks as a criticism of people who had filed complaints with the inspector general.

Sikora's briefing came after The Times began asking questions about alleged retaliation against whistleblowers and the incident in which Staff Sgt. Jennifer Pineda found that someone at the Fresno base had urinated in the boots she had left in a bathroom overnight.

At least five Guard members, including a pilot who was killed in October in a crash during a training mission in Ukraine, from the 144th wing filed formal complaints. Two of those were related to the urine incident, including one filed by Pineda.

She said in her complaint she feared she'd be forced out of the military because some had speculated that she urinated in her own boots “for attention.”

A 144th pilot, Lt. Col. Rob Swertfager, also filed a complaint alleging that commanders punished him — including by withholding his pay on occasion — for speaking up for Pineda.

Both of them, along with others, felt targeted by Sikora's remarks, the report said.

“This clearly means that anyone exercising their right to speak with the IG or the press is not honorable, not a good person, and implies they are not a red-blooded American,” the report quotes Swertfager as saying. “… The speech was clearly directed at me and a few other people that have pursued justice through the IG.”

Rieger recommended in his report that Sikora receive a memorandum of reprimand and be relieved of command due to the “loss of faith” in him as a 144th leader.

He also recommended “close monitoring” of any unfavorable personnel actions against complainants or witnesses in the 144th as possible reprisal.

Garrison was removed because the California Military Department, which oversees the air and army branches of the Guard, had lost “faith, trust and confidence” in his ability to lead, a spokesman said.

In a report released after the ousters of Garrison and Kelly, the Military Department inspector general cited findings of the Times investigation two months ago.

“Based on this article, and in addition to other evidence collected, it would appear that there is a culture of reprisal, or at a minimum the perception of reprisal, that has a long stemmed history within the 144th,” the inspector general report states.