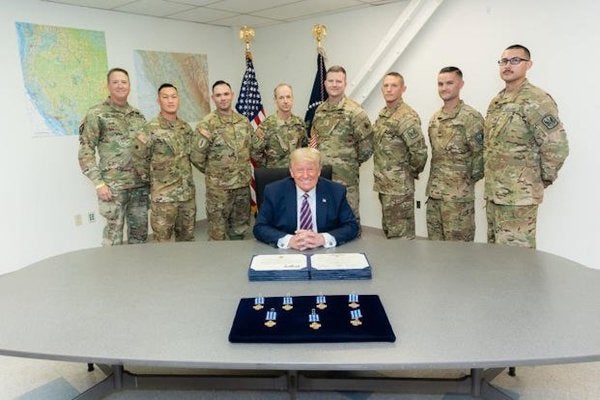 Editor’s note: This article by Bing Xiao originally appeared on Military.com, a leading source of news for the military and veteran community

President Donald Trump awarded the Distinguished Flying Cross on Monday to two California Army National Guard aircrews who flew repeatedly into a raging wildfire in two separate endeavors to rescue hundreds of trapped campers — despite being warned repeatedly to abort due to the danger.

“Today, it's my profound honor to award seven extraordinary soldiers with the Distinguished Flying Crosses for their remarkable courage to rescue their fellow citizens,” Trump said.

The crews responded to the Creek Fire in the Sierra Nevada Mountains on Sept. 5, where hundreds of campers were trapped at Mammoth Falls, continuing the mission into the early hours of Sept. 6.

“While they were on their way to the campground, the crew received word from state and local officials and Homeland Security that it was far too dangerous to continue the mission; turn back,” Trump said. “But they decided to continue anyway, knowing they might not return. They knew that people were in great danger.”

As night set in, the crews could see almost nothing through the miles of dense smoke, even using night-vision goggles and their expert navigation skill, according to the California National Guard.

“But they reached the camp. They found the stranded families,” Trump said.

In all, 242 people were rescued from Mammoth Pools in a single night, according to a California National Guard release. After that, helicopters could not land to rescue anyone else due to poor visibility, until a clearing period on Sept. 8, when the crews evacuated another 175 people from China Peak, Lake Edison and Muir Trail Ranch through the thinner smoke.

“Less than 48 hours after they rescued [people] at Mammoth Pool, they flew to another treacherous mission,” Trump said. “On their first two attempts, they were advised to abort the mission. But they chose to try a third time at great risk through their own lives.

“Our nation is strong because of remarkable individuals like these service members,” he continued. “America prevails because of the brave and selfless patriots who risk everything so that they may save the lives of people in many cases that they don't know. Our nation has benefited by your bravery and on behalf of our great nation. I thank you very much.”