The California National Guard can’t locate more than 4,000 of the 9,700 soldiers caught up in the military enlistment bonus... 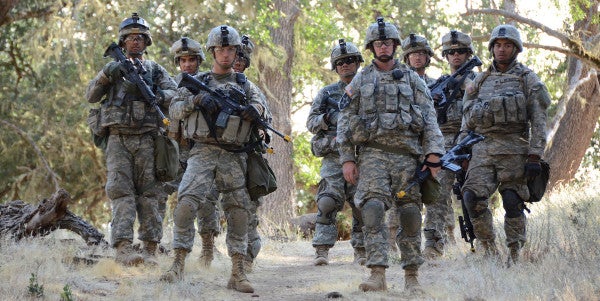 The California National Guard can’t locate more than 4,000 of the 9,700 soldiers caught up in the military enlistment bonus scandal that has rocked one of the nation’s largest Guard organizations, according to its commander.

In an internal memo obtained by the Los Angeles Times/Tribune Washington Bureau, Maj. Gen. David Baldwin said the California Guard needed help finding thousands of soldiers who received improper enlistment bonuses or other incentives at the height of the Iraq and Afghanistan wars a decade ago.

Baldwin also wrote that the vast majority of the 9,700 current and former California Guard soldiers who received improper payments did so “unknowingly” and enlisted “in good faith at a time of war.”

His Oct. 27 memo is one of the first unequivocal statements by a senior military official since the bonus scandal surfaced that most California Guard soldiers did not know they were getting money improperly. It suggests most may be eligible to have some or all of their debts forgiven under a Pentagon review.

But the new Pentagon inquiry already appears mired in confusion. Despite Baldwin’s assertions, the Treasury Department tracked down some of the 4,000 soldiers long ago through tax returns and forced them to repay their bonuses, raising questions about whether the Pentagon will now return the money.

Brett Sholtis, who left the California Guard in 2007 and now lives in York, Pa., received a letter from the Treasury Department in 2015 ordering him to repay $2,500.79 that he was given after he first enlisted in 2001.

When he refused to pay, the Treasury Department garnished his wages and claimed his 2015 federal tax refund until the debt was paid last spring, he said.

“I was one of those soldiers who couldn’t be located,” Sholtis said Monday. “They made a weak effort and then immediately proceeded to step two — turning it over to Treasury.”

A Los Angeles Times/Tribune Washington Bureau report this month about the enlistment bonus repayment demands to California Guard soldiers and veterans, including some who were wounded in battle, sparked a public furor about what many viewed as an injustice.

Four days later, Defense Secretary Ashton Carter suspended the debt recovery program and ordered faster appeals for soldiers and veterans seeking relief from the debts. He set a July 1 deadline next year to complete the process.

The Pentagon’s efforts to recover the money have brought hardship to many soldiers and veterans, Baldwin said, “who signed up for incentives based on misinformation about their eligibility.”

The supposedly missing soldiers in Baldwin’s memo are likely to have retired, changed addresses, moved to Guard units in other states or transferred to the active-duty Army, officials said.

The affected soldiers did not respond to letters sent by the California Guard to addresses on file for them, the officials said.

Baldwin asked current and former California Guard members for help locating the soldiers. He directed them to the Soldier Incentives and Assistance Center, an office set up in Sacramento to help soldiers appeal to the Pentagon for waivers of some or all of the debts.

With the center’s help, “hundreds of soldiers … have had their debts forgiven or have corrected their records,” he wrote. “Unfortunately, more than 4,000 Soldiers with errors in their incentive packets have not had the same opportunity.”

In 2010, after the Sacramento Bee first reported corruption in the California Guard enlistment payments, an FBI investigation found that officials had given millions of dollars in bonuses and student loan payments to soldiers who did not qualify for them, or who were approved despite paperwork errors.

A California Guard audit of the enlistment contracts, completed in September, concluded that 9,700 soldiers had received improper bonuses and other payments.

Three officers also pleaded guilty to fraud and were put on probation after paying restitution. Nearly 100 California Guard members have been disciplined for knowingly paying or accepting improper bonuses.

A senior California Guard official, Col. Darrin Bender, blamed the improper payments on the pressure recruiters faced to fill Army ranks starting in about 2005, when the Pentagon was engaged in bitter fighting in both Iraq and Afghanistan.

“To increase soldier retention, the Army funded a number of very generous bonus programs,” Bender, the California Guard’s director of government affairs, wrote in an email last week to members of the California Legislature.

“These programs were implemented far too quickly, without the appropriate institutional checks and balances,” and recruiters were under “extreme pressure” to meet “high enlistment and re-enlistment quotas,” he wrote.

Though a small number of soldiers knew they were committing fraud, the “vast majority acted on good faith resulting from bad information from recruiters and others in positions of authority,” he added.