California is home to more vets than any other state, and is making more memorials to ensure they’re all recognized 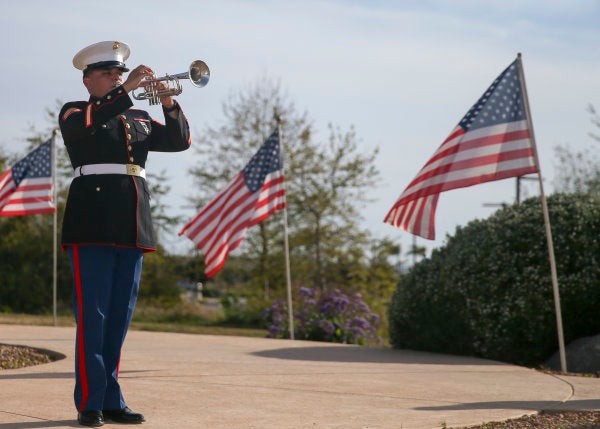 Arnold Zuniga walked quickly, quietly, to the wall of the fallen and dragged his finger across the name of the childhood friend who never came back.

Zuniga is 69, 70 at year's end. Sacramento-born and raised in a neighborhood downtown, he attended Christian Brothers High School, then Sacramento City College, before joining the Army. Fox is forever 19.

“Thomas died Mother's Day 1970,” Zuniga said late on a brilliant Thursday morning at the California Vietnam Veterans Memorial in Sacramento's Capitol Park. “There were four of us who volunteered for the draft. November '68. We went to Fort Lewis, Washington, then split up from there.”

They were Army recruits. They were all Sacramento kids. Zuniga was off to Fort Ord and radio school, then Fort Jackson, South Carolina. Fox, an artilleryman, shipped out for Vietnam. Fox was in country 10 months. Eight more weeks and he would have made a year.

In Sacramento and across the state, Zuniga and other Californians will honor, remember and mourn the men and women lost to war this Memorial Day. More veterans live in California than any state in the nation, and Californians are working to ensure all who served their country from the Golden State are recognized, said Vito Imbasciani, secretary of the California Department of Veterans Affairs.

“California has the most veterans of any other state — 1.7 million people — but no one group leads the nation,” the secretary said.

That makes sense in a state of 40 million and speaks, Imbasciani said, to the diversity of Californians who wore the uniform: 250,000 women, tens of thousands of Hispanic and Asian American, African American and Native American veterans.

On Memorial Day in San Diego's La Jolla community, Mount Soledad National Veterans Memorial will honor Doris (Dorie) Miller, the first African American to receive the Navy Cross for his bravery aboard the crippled aircraft carrier USS West Virginia on Dec. 7, 1941, the attack on Pearl Harbor that thrust America into war. Miller was lost at sea nearly two years later in a torpedo attack on the escort carrier USS Liscombe Bay in 1943 and was officially presumed dead in 1944.

On Monday, Imbasciani will be in Riverside to dedicate what will become the centerpiece of the American Indian & Alaska Native Veterans Monument at Riverside National Cemetery, said to be the first such monument to be dedicated at a national cemetery.

“We have 114-118 federally recognized tribes in California,” Imbasciani said. “They have a greater proportion of veterans to their number than any other group, but we do very little to recognize them publicly. But we're doing better.”

The statue, a twice-life-sized depiction of an American Indian draped in the American flag, and memorial honor more than two centuries of service by the nation's indigenous people.

Sharron Savage, whose mother was Chippewa and whose uncles fought in World War II and the Korean War, has worked for more than a decade with American Indian tribes, veterans and others to make the memorial a reality as the memorial committee's chairwoman.

“So many people have worked so hard to get this memorial done. Putting it here on sacred ground — it recognizes the people who fought for our country,” said Savage, who is from Hemet in Riverside County. “It's been simply heartwarming to be able to honor my uncles as American Indians, who weren't recognized as American Indians when they served.”

A couple hours to the east in Cathedral City in Southern California's Coachella Valley, California became the first state in the country to formally designate an official memorial to honor gay and lesbian veterans with the dedication of the California LGBTQ Veterans Memorial in April.

The desert monument holds special significance for Imbasciani, a gay veteran who served in the U.S. Army Medical Corps during the years of “don't ask, don't tell,” the government policy that allowed gays and lesbians to serve in the Armed Forces — as long as they did not publicly disclose their sexual preference — keeping servicemen and women in the shadows.

“So many things have happened since January — that monument in Cathedral City — it's the first in the nation. There's nothing else like it. It's allowed us to express publicly” the contributions of LGBTQ veterans, Imbasciani said.

At the Cathedral City ceremony, Imbasciani heard moving stories of veterans who lost loved ones but could not fully honor their memory because of their sexuality.

On Wednesday, Imbasciani recalled his own trials as a gay soldier with a husband and two children in the U.S. Army Medical Corps: “'Don't ask, don't tell' was a terribly harmful national policy. I have a husband and two kids. They couldn't see me off to war or greet me when I came home,” he said. “There was a price to pay emotionally. I couldn't be honest about the fundamental question of who I am.”

Today, the Coachella Valley site ensures that the sacrifices of gay and lesbian veterans will not be forgotten.

Imbasciani says that is his mission for all of California's veterans.

“However you choose to celebrate Memorial Day, you have all those freedoms to do that which was purchased at great price,” he said Wednesday. “This day is sacred, this day is holy and we will make it our business to recognize everybody who served.”

SEE ALSO: The state with the most active-duty US troops is also too expensive for veterans to retire, study say