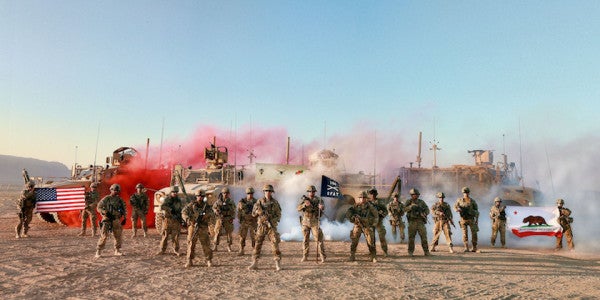 Lawmakers on Sunday condemned a Pentagon effort to recoup enlistment bonuses improperly paid to thousands of California National Guard soldiers a decade ago, saying the overpayments were not the soldiers’ fault and calling on the Pentagon or Congress to waive their debts.

McCarthy, R-Calif., said the House would demand a briefing from the National Guard Bureau, the Pentagon agency that oversees the California branch of the Guard.

The Los Angeles Times reported on Sunday that the Pentagon was demanding repayment of enlistment bonuses — which often reached $15,000 or more — from about 9,700 California Guard soldiers, many of whom served multiple combat tours in Iraq and Afghanistan.

“The Department of Defense should waive these repayments, and I will be requesting a full brief from Army and National Guard leadership,” McCarthy said in a statement. “The House will investigate these reports to ensure our soldiers are fully honored for their service.

“Our military heroes should not shoulder the burden of military recruiters’ faults from over a decade ago,” McCarthy said. “They should not owe for what was promised during a difficult time in our country.”

Related: Veterans May Be Forced To Repay Separation Money In Exchange For Benefits »

The bonuses were mostly given out from 2006 to 2008 by California Guard recruiters who were under pressure to help the Pentagon fill its ranks for two major wars.

The soldiers say the Pentagon is reneging on 10-year-old contracts and imposing severe hardship on veterans whose only mistake was taking money that was offered to them at the time.

“These service members — many of whom were sent into combat — are now being forced to make difficult and painful decisions to pay back thousands of dollars they never knew they owed,” said Rep. Mark Takano, D-Calif., a member of the House Veterans Affairs Committee. “The solution to this ridiculous situation is an act of Congress.”

“I am appalled by the California National Guard’s effort to claw back bonuses and benefits improperly paid to service members 10 years ago,” Takano added.

The California Guard launched the repayment effort after audits of 14,000 soldiers who received bonuses determined that 9,700 did not qualify for all or some of the payments, or that the paperwork was missing.

Audits of soldier records began five years ago and were completed last month. Although the problem surfaced in other states, it was worst in California, which has 17,000 troops and is one of the largest state Guard organizations.

California Guard officials in Sacramento say federal law bars them from wiping out the debts, insisting that only the Pentagon can do so and that it may require an act of Congress.

“We didn’t have authority to waive any debts,” Col. Peter Cross, a spokesman for the California Guard, said Sunday.

California Guard officials emphasized that the Guard is helping troops file appeals. But the vast majority of soldiers who the Guard claims received the improper bonuses are still facing collection efforts.

Only 1,200 soldiers have sent the Pentagon appeals asking for forgiveness of some or all of their bonuses and other payments. About half of those have received reduction in their payments, officials said.

That leaves the rest facing large bills — and the threat of wage garnishment, tax liens and interest payments — if they refuse to pay, officials said.

“There are soldiers out there who are being pursued that have totally ignored us,” Cross said. “If they want, they can contact us to start advocating on their behalf.”

About 75 percent of the soldiers found to owe bonuses and other payments have either not replied to letters advising them of their debts or refused to cooperate, said Col. Michael Piazzoni, the California Guard officer who oversaw the audits.

Soldiers who filed a class-action lawsuit seeking to block the bonus recoupment said Sunday that they have seen a sharp increase in visitors to California Veterans for Justice, a Facebook page seeking contributions to help defray the costs of the lawsuit.

Justice Department lawyers have filed a motion to dismiss the lawsuit, which is filed in federal district court in Sacramento, and a ruling by the judge in the case is expected by the end of the year

Robert Richmond, a former Army special forces soldier who is facing recoupment demands of $19,000, said the soldiers had managed to raise only $2,500 so far to pay lawyers’ costs connected with the suit.

A petition started Saturday on the White House website after the Times story was posted online called for Congress to step in and alleviate the debts.

“To Congress: This is not the soldiers’ fault nor should it be their burden,” the petition reads. “Please help these heroes.”