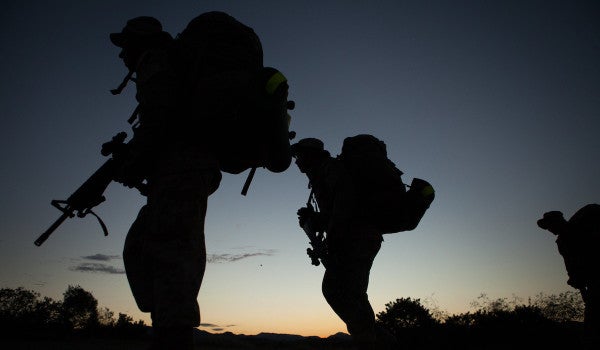 The sailor, Houston said, is a corpsman assigned to Camp Pendleton.

None of the 19 service members has been charged with a crime. A Marine official not authorized to comment on the case said Friday he expected charges to be filed early next week.

Sixteen Marines were arrested Thursday morning during battalion formation on the parade deck in the San Mateo area of the base, 1st Marine Division Spokesman 1st Lt. Cameron Edinburgh said.

“It was a public display for the entire unit to see,” he said.

The 16 Marines arrested at formation Thursday ranged in rank from private first class to corporal, or E-2 to E-4. Houston said he could not comment on the ranks of the two additional Marines and the sailor Friday.

Those arrested are being held at the Camp Pendleton brig. The Marines have not yet released their names.

“Out of respect for the privacy of the implicated Marines, we will not release names or other identifying information until charges are announced,” Marine Maj. Kendra Motz said in a statement Friday.

The Marine Corps said information from a previous human smuggling investigation led to the arrests.

ahe service members arrested by NCIS are expected to be prosecuted in the military court system. Two more Marines, also allegedly involved in the smuggling operation, are already being prosecuted in federal court.

Law and Salazar-Quintero, both lance corporals, were arrested after Border Patrol agents saw their vehicle pull off Interstate 8 around 10 a.m. near Jacumba Hot Springs and pick up three unauthorized immigrants, according to U.S. District Court documents. They were arraigned in federal court in San Diego on July 8.

According to the court complaint, both Marines said they worked with an unidentified recruiter who told them where to go. The two were pulled over by Border Patrol some time later with three passengers in the back seat.

Both allegedly spoke to federal agents after waiving their rights to an attorney. Both men blamed each other for getting involved in the scheme, according to court documents.

Attorneys for Law and Salazar-Quintero declined to comment on the case Thursday.