More Than 1,000 Marines At Camp Pendleton Ordered To US-Mexico Border

About 1,100 Marines in the 1st Marine Expeditionary Force will go to the U.S.-Mexico border this week in support of... 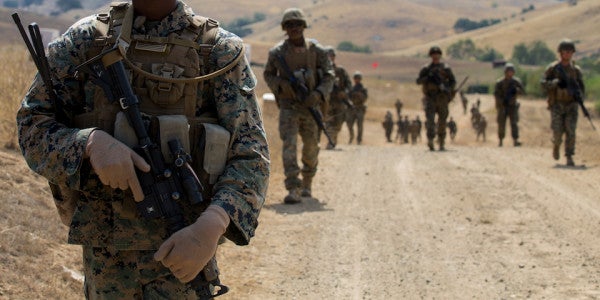 About 1,100 Marines in the 1st Marine Expeditionary Force will go to the U.S.-Mexico border this week in support of troops as a caravan of Central American migrants advances.

The Marines will assist the Department of Homeland Security as part of Operation Faithful Patriot, said 2nd Lt. Fredrick Walker of the Special Purpose Marine Air-Ground Task Force 7. The Marines will provide engineering support at the border, including building temporary barriers, barricades, and fencing.

Marines also will provide medical teams, command and control facilities, temporary housing for Customs and Border Protection personnel and personal protective equipment for those troops, Walker said. President Trump last week pledged to send up to 15,000 troops to the border in response to the slow-moving caravan of migrants.

The planned deployment follows an announcement last week by the U.S. Northern Command that identified Camp Pendleton and Marine Corps Air Station Miramar among several Southern California bases that will house troops assisting U.S. Customs and Border Protection in enforcing security at the southeastern border. Marine aircraft are being staged at Miramar.

The two Marines Corps bases will serve as landing spots for additional personnel that may be needed at the U.S.-Mexico border, said Major Mark Lazane, spokesman for the U.S. Northern Command, a joint command in Colorado Springs that is designated to synchronize units and personnel for the Department of Defense in support of civil authorities.

The operation, ordered by the Trump administration, is an effort to enforce border security as a migrant caravan from Central America makes its way to the southeastern U.S. border. Many in the group are fleeing violence in their home countries. The caravan reached Mexico City over the weekend.

The largest caravan traveling through Mexico is still weeks away from the U.S. border, and migrants have given no indication where they might cross. The Rio Grande Valley is the shortest route from Central America but also one of the most dangerous.