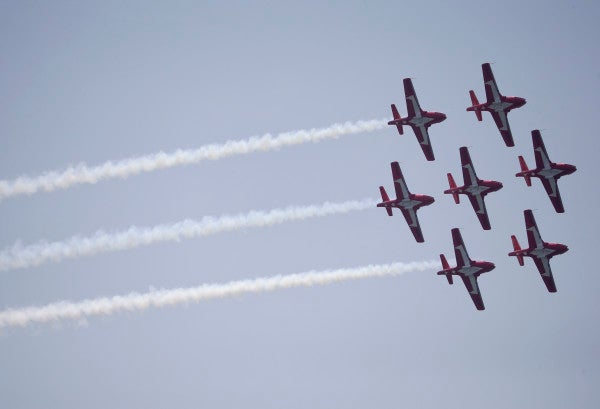 A Canadian air force jet participating in a flyover dubbed “Operation Inspiration” crashed into a residential neighborhood in Kamloops, British Columbia, on Sunday, killing one team member and seriously injuring another.

Royal Canadian Mounted Police said it received reports that a Snowbird plane had crashed into a residence at 11:42 a.m. local time.

“It is with heavy hearts that we announce that one member of the CF Snowbirds team has died and one has sustained serious injuries,” Canada's Department of National Defense and the Canadian Armed Forces said in an emailed statement.

The department said the service member who died was Cap. Jennifer Casey, the team's Public Affairs Officer, originally from Halifax, Nova Scotia. Captain Richard MacDougall, one of the team's coordinators who was piloting the aircraft, is being treated for his injuries.

The department said the Snowbird aircraft were participating in “a cross-Canada tour to lift the spirits of Canadians and salute front-line workers during the COVID-19 pandemic.” The aircraft were meant to fly in a nine-jet formation with trailing white smoke in cities across the country throughout the week, though the operation has since been delayed “indefinitely.”

The crash occurred shortly after the jet took off from Kamloops Airport, the department said.

The Canadian air force flight safety team is investigating the circumstances of the accident.

“Operation INSPIRATION was intended to lift the spirit of Canadians at this difficult time and the Snowbirds accomplished their mission,” said Canada's defense minister Harjit Sajjan. “I know that all Canadians grieve this tragic loss.”

Video of the incident posted to Facebook by a user named Cory Pelton appears to show the aircraft flying alongside another jet before veering sharply and nosediving. Smoke can be seen coming out of the aircraft as it makes its descent.

Andrea Woo, a journalist at the Globe and Mail, tweeted video shared to Snapchat by people at the scene of the crash appearing to show debris from the plane in someone's yard.

“As we watch the Snowbirds fly over our homes, let's remember that we are all in this together,” Canadian Prime Minister Justin Trudeau said last month when announcing the flyover.