The country that brought us Justin Bieber and poutine just added one more notch to its belt, and this one... 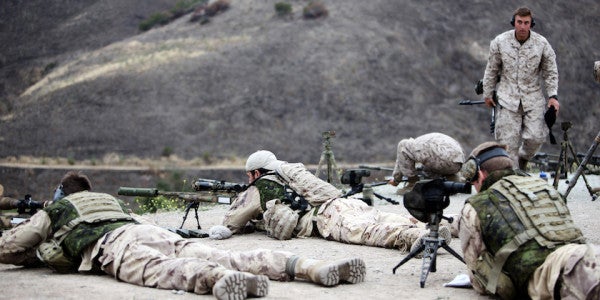 The country that brought us Justin Bieber and poutine just added one more notch to its belt, and this one doesn’t serenade teenage girls or clog your arteries.

Last month, a sniper with Canada’s special forces smashed the world record for longest kill shot in military history, taking the life of an ISIS militant in Iraq from a mind-blowing distance of 3,540 meters, Canadian newspaper The Globe and Mail proudly reports.

That’s nearly (or aboot) a thousand meters greater than the previous record, which was set in Afghanistan in 2009 by British sniper Craig Harrison, who killed a Taliban fighter from a now not-so-impressive distance of 2,475 meters with a 338 Lapua Magnum rifle.

The name of the Canadian sniper has not been released, but anonymous military sources told The Globe he was a member of Joint Task Force 2, an elite counterterrorism unit that made its big battlefield debut during the invasion of Afghanistan as part of Task Force K-Bar, and that the record-shattering kill shot was made with a McMillan TAC-50 sniper rifle (also known as the MK 15, which is used by the Navy SEALs).

The Canadian Special Operations Command confirmed in a statement to the Washington Post that a member of “JTF2 successfully hit a target from 3,450 meters;” however, it did not provide details on how and when the incident took place, citing operational security concerns.

The sources also claimed that the fatal round took less than 10 seconds to travel from a high-rise building where the Canadian sniper was located to the target, who was apparently advancing on a group of local allies.

JTF2 commandos are currently training, advising, and assisting Kurdish peshmerga forces in northern Iraq alongside other Canadian special forces trainers, according to The Globe. And while they are technically not authorized to engage in direct combat, the commandos are allowed to accompany the Kurds to the front lines on “training missions” and mark targets for coalition air strikes.

“The shot in question actually disrupted a Daesh [ISIS] attack on Iraqi security force,” one source told The Globe. “Instead of dropping a bomb that could potentially kill civilians in the area, it is a very precise application of force, and because it was so far away, the bad guys didn’t have a clue what was happening.”

The kill was independently verified by video and “other data,” according The Globe.

“Hard data on this,” one military source told the newspaper. “It isn’t an approximation. There is a second location with eyes on with all the right equipment to capture exactly what the show was.”

The Globe made sure to point out that — “despite the small size of the Canadian Armed Forces compared to the United States and Britain” — Canadian snipers now account for three of the top five world’s longest sniper kills.

In 2002, two Canadian snipers belonging to the same light infantry battalion set back-to-back world records during Operation Anaconda in Afghanistan within weeks of each other. Those two currently rank as number three and four behind Harrison, the Brit. The number five slot goes to U.S. Army Ranger Sgt. Bryan Kremer, who killed an Iraqi insurgent from 2,300 away in 2004. He was armed with a Barrett M82A1 rifle, according to The Globe.

“Canada has a world-class sniper system,” one military source told The Globe. “It is not just a sniper. There is an observer. This is a skill set that only a very few people have.”

Update: This article has been revised to include details from a statement released by the Canadian Special Operations Command (6/22/2017 5:40pm EST).