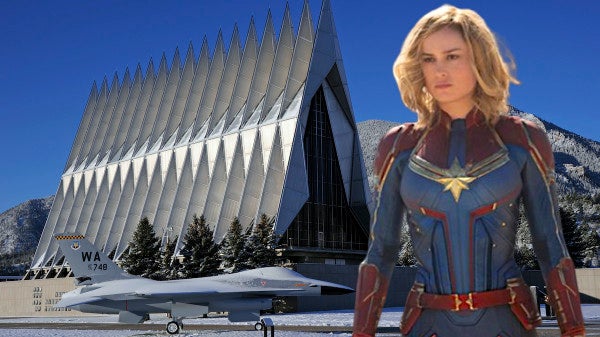 When the Brie Larsen blockbuster Captain Marvel rolled out earlier this year, the Air Force launched an all-out recruiting effort, hoping to capitalize on the story of female fighter pilot-turned superhero Carol Danvers.

The Air Force placed pre-show ads in more than 3,600 theaters nationwide, bought space at geek hubs such as Fandom.com, and hosted its own press events with Larsen, as well as a red-carpet screening in Washington, D.C.

From at least one perspective, the Air Force effort to hitch its wagon to Captain Marvel's star was an unreserved success.

An inspirational 30-second commercial titled “Origin Story,” timed to coincide with the film's release in March, was the most popular piece of social media promotional content published by any service in 2019, Lt. Col Jacob Chisolm, deputy chief of strategic marketing at the Air Force Recruiting Service (AFRS), told the Defense Advisory Committee on Women in the Services (DACOWITS) during its December meeting.

Through paid media promotion, “Origin Story” received 173,000 visits, 11 million views of the video itself, and 200 million impressions overall, according to Air Force statistics.

“We couldn't ask for a better movie to do that,” Chisolm said. AFRS is currently run by Brig. Gen Jeannie Leavitt, the service's first female fighter pilot upon whom Danvers' character is loosely based. Leavitt was commander of the 57th Wing at Nellis Air Force Base, Nevada, as the movie was filming.

“It was a huge success. We had a fantastic media campaign,” Chisolm said.

But has the movie hype and messaging translated to recruiting numbers? It may be too soon to tell.

The academy is one of the main accession hubs for the service.

“In 2014, the Secretary of the Air Force and Chief of Staff of the Air Force set applicant pool goals for all officer accessions sources,” Maureen Welch, Air Force Academy director of public affairs, told Military.com via email. “The guidance was used to influence our marketing and outreach efforts.”

Welch said the marketing efforts do not necessarily seek out applicants for a particular class composition, which is why the academy “has not seen an out of the ordinary increase in female applicants, nor female applicants interested in aviation careers” despite the film's debut.

The popular movie and Air Force advertising campaign came in the midst of a multi-year effort by the academy to diversify its cadet population.

But Marvel did bring more eyeballs to the service's career website during a time of renewed push to inspire young women to join the Air Force's ranks.

The Air Force says it capitalized on the opportunity to work with the “Captain Marvel” filmmakers to showcase a leading female aviator, Danvers, who started out as a young trainee only to become a top-notch F-15 Eagle pilot, and ultimately, liberator of the universe.

In a round table with reporters at the Air Force Association's Air, Space and Cyber conference in September, Leavitt cited the effect of advertising around Captain Marvel, reporting anecdotally that officials were seeing more interest from women in Air Force pilot careers.

“Quite honestly I think it's going to be one of those things that is going to take some time to show, kind of the return on investment,” she said. “Because a lot of these people being inspired are kind of high school, college age, where we might not see that for a little while later. … We do have an increased number of women who want to be pilots. But I don't know if that's because of Captain Marvel. … I don't know the why behind it.”

As of July, the Air Force had 778 female pilots, accounting for roughly 6% of the pilot force, according to the Air Force Personnel Center.

The “Origin Story” ad used the “Captain Marvel” framework to present real female airmen who “all got their start somewhere.”

“For us, it was the U.S. Air Force,” a group of women say in the commercial.

“We're looking for what's going to follow this, but we're going to ride this wave as long as we can,” Chisolm said.

“We're going to try to get involved in everything … and we're going to do what we can do to get out and make sure we get our message across,” Chisolm said.

He added that the Air Force's plan is to “jump on the 'Top Gun 2' bandwagon, too,” despite the film showcasing naval aviation.

“We're not going to let that slide, either,” he said.