The 84mm Carl Gustaf recoilless rifle has remained among the most beloved weapons in infantry anti-tank arsenals for decades. Now, after years of tweaking, everyone's favorite boomstick is picking up a serious update: laser-guided precision munitions 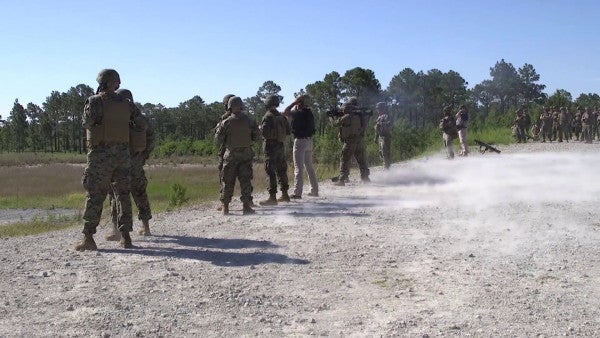 The 84mm Carl Gustaf recoilless rifle has remained among the most beloved weapons in infantry anti-tank arsenals for decades. Now, after years of tweaking, everyone's favorite boomstick is picking up a serious update: laser-guided precision munitions.

According to the companies, the new GCGM can reach out and hit both stationary and moving targets at a range of up to 2,000 meters, well beyond the existing effective firing ranges of its current munitions.

“Three munitions were fired in total; two against static targets and one against a moving target,” the companies said of the tests, which took place at the Mile High Range in Sierra Blanca, Texas, United States and at Saab Bofors Test Centre in Karlskoga, Sweden in late September.

“A semi-active laser was used to guide the munitions to target impact,” according to the statement. “Other seeker technologies (e.g. imaging IR) were also demonstrated as optional solutions for the final product.”

The new munition comes on the heels of Saab's new M3E1 variant of the iconic recoilless rifle, which offers a titanium shell for reduced length and weight and the capability of firing off multiple salvos of specialized rounds compared to single-use weapons like the AT-4 anti-tank system that the new Gustaf is designed to replace

Those upgrades are coming to a squad near you sooner rather than later. In 2016, the Army vowed to deck out every infantry squad with an M3 Carl Gustaf, tripling its budget request for recoilless rifles in its fiscal year 2019 with the goal of picking up a total of 2,460 systems through fiscal 2023

Last year, a Raytheon representative told Army Times that only U.S. Special Operations Command has an open requirement for a precision-guided Carl Gustaf round at this time.

According to Military.com, Saab and Raytheon will have a chance to actually show off the system for Pentagon planners as soon as next spring.