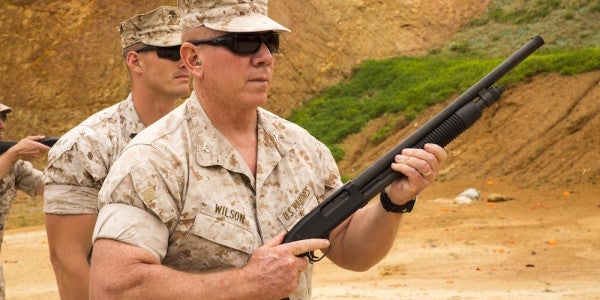 A newly released charge sheet against a senior active-duty Marine Corps colonel accused of child sexual abuse and assault reveals a pattern of alleged abuse and compromising behavior, much of it involving children of various ages.

Opening arguments are set to begin Wednesday morning in the case of Col. Daniel Wilson, accused of multiple counts of rape and sexual abuse of a child, assault consummated by battery of a child, and conduct unbecoming an officer.

Wilson's attorney, Phillip Stackhouse, said earlier this year that his client asserts his innocence and is pleading not guilty to all charges.

Wilson, formerly the operations officer for II Marine Expeditionary Force aboard Camp Lejeune, North Carolina, has been a resident of the base brig since January, having been remanded there after going absent without leave in late December, according to his charge sheet.

The charge sheet, released to reporters late Tuesday evening, shows that all of Wilson's charges stem from alleged activity at various points in 2016.

The gravest charges stem from a period ranging from June 26 to July 13. Wilson is accused of digitally penetrating, kissing and touching a girl under the age of 12 years. The offenses allegedly took place aboard Camp Lejeune. In the same period, he is accused of striking a girl under 16 years of age on the buttocks and licking her body on multiple occasions. It's unclear from the redacted charge sheet whether these allegations refer to a single victim or to two separate individuals.

During the same timeframe, Wilson is also accused of providing alcohol to children ages six and 10 years old. This alleged behavior is charged under conduct unbecoming an officer and a gentleman.

Wilson is also accused of sexual assault in connection with multiple episodes in late December 2016, after he had already been arrested and charged for earlier alleged offenses. According to the charge sheet, he is alleged to have held down and digitally penetrated a female victim whose age is not specified in four Dec. 29 incidents. In an alleged Dec. 26 incident, he is accused of touching an individual's face and putting his finger in their mouth without consent.

Finally, the charge sheet details alleged behavior in Darwin, Australia and Okinawa, Japan in February and March of 2016. Wilson is alleged to have asked for revealing photos and underwear belonging to another man's wife, of making lewd and sexual comments about a woman, and sending an inappropriate email message from his work computer, according to the document.

Wilson, then 55, was first charged November 15, 2016 after investigations by II MEF and Naval Criminal Investigative Service led to his arrest.

It's extraordinarily rare for a colonel of Wilson's seniority to face charges so grave. According to information provided by II MEF, Wilson was promoted to colonel in 2010 and completed 11 deployments over the course of his 35-year career.

His court-martial is expected to run until Sept. 9.