‘You Going To Goddamned Steam’: Trump Rails Against The Navy’s New Catapult System

President Donald Trump apparently doesn't like digital. In an interview with Time magazine published Thursday, Trump railed against what he... 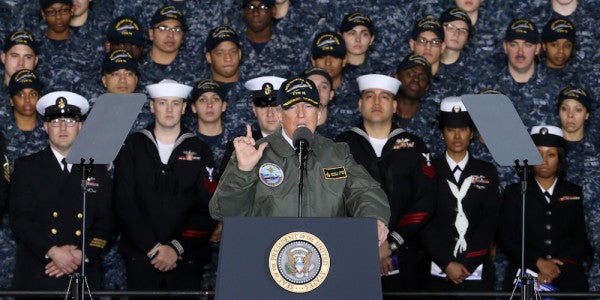 In an interview with Time magazine published Thursday, Trump railed against what he called a “digital catapult system” the Navy was using on the USS Gerald R. Ford.

The futuristic aircraft carrier, which began sea trials in April, uses an electromagnetic aircraft-launch system, which reduces maintenance costs and can speed up the launch of aircraft, among other benefits.

Trump visited the Ford in March, giving a speech from the deck in which he talked about the need for an increase to the defense budget. It's unclear whether Trump's order to someone on board to use steam-powered hydraulic catapults will be carried out.

A Navy spokeswoman could not immediately comment when reached by Business Insider.