The United States should keep arming and aiding the Kurdish-led Syrian Democratic Forces following the planned U.S. withdrawal from Syria, provided the group keeps up the pressure on ISIS 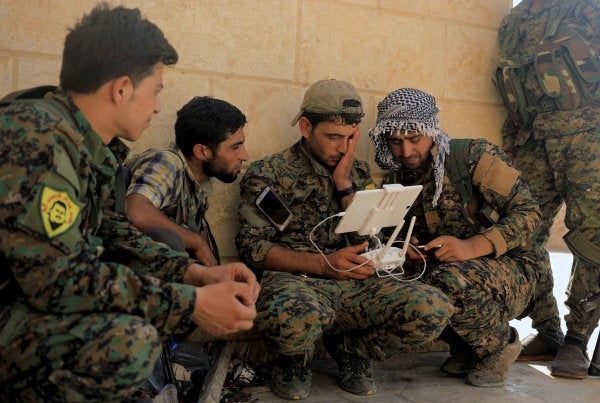 The recommendation by Army General Joseph Votel, who oversees U.S. forces in the Middle East as head of Central Command, is one of the strongest signs yet of U.S. military hopes for an enduring partnership with the SDF despite the concerns of NATO ally Turkey, which says Kurdish SDF fighters are terrorists.

“As long as they are fighting against ISIS and continue to keep pressure on them, I think it would seem to me to be in our interest to continue to provide the means for them to do that,” Votel said in an interview, using an acronym for Islamic State.

Votel said he expected future U.S. assistance to the SDF to change after it seizes the final bits of Islamic State territory. The SDF will then have to contend with a more dispersed, harder-to-detect network of Islamic State fighters, who are expected to wage guerrilla-style attacks.

“When they go to a kind of a wider area security mode, then that will drive a different type of requirement (for support),” he said during a trip to Oman.

Asked about Votel's remarks, a White House official did not comment on future assistance to the SDF but reaffirmed the Trump administration's commitment to the broader anti-Islamic State coalition.

U.S. President Donald Trump confounded his own national security team, including generals like Votel, with a surprise decision to withdraw the roughly 2,000 U.S. troops from Syria, declaring that Islamic State had been defeated there. The decision ran against Pentagon recommendations and helped lead to the resignation of Trump's defense secretary, Jim Mattis.

Also on Friday, Votel told CNN, of Trump's decision, “It would not have been my military advice at that particular time.”

Reuters has reported that Trump's decision was in part driven by an offer by Turkey to keep the pressure on Islamic State once the United States withdrew.

But current and former U.S. officials warn Ankara would be unable to replicate the SDF's success across the areas of Syria that the militias captured with U.S. support including arms, air strikes and advisers.

Brett McGurk, who resigned in December as Trump's special envoy to the U.S.-led coalition against Islamic State, warned last month that the SDF could not be replaced as the provider of stability in areas of Syria formerly held by the militant group. He also cautioned that Turkey was not a reliable partner.

Asked whether he agreed that the SDF could not be replaced, by Turkey or anyone else, Votel said: “I would agree with that and I would include Americans, frankly. This is not a mission we should take on ourselves completely.”

“The fact that they (the SDF) own this, they represent the tribes … is a really important aspect,” Votel said.

Nearly two months after Trump announced the pullout, Votel and other U.S. military leaders are hammering out the best way to carry it out while preserving as many gains as possible.

Senator Angus King, an independent from Maine who sits on the Senate committee overseeing the military, voiced deep concern in an earlier interview about Trump's decision and the impact on U.S.-backed Kurdish fighters in the SDF.

“The military (are) going to make the best of it, but it's clear to me that what they are doing is playing catch-up in terms of determining what the strategy is,” he told Reuters.

U.S. arming of the SDF has infuriated Turkey, which sees the Syrian Kurdish YPG fighters that spearhead the group as indistinguishable from the Kurdish PKK movement that has waged an insurgency inside Turkey.

The YPG fear a Turkish onslaught once U.S. forces withdraw.

That has left Washington searching for a way to address the concerns of both partners.

In Europe, the plight of the SDF has come into sharp focus. A senior defense official, speaking on condition of anonymity, said the issue came up at a meeting of defense ministers on the sidelines of the Munich Security conference on Friday.

“Many of (them) recognize the degree to which the SDF has actually done the hard fighting and dying and they feel a sense of obligation to just not turn our backs,” the official said.

The SDF hold about 800 foreigners who fought with Islamic State. What will happen to those prisoners in Syria following the U.S. withdrawal is unclear. A top Kurdish official recently warned the SDF may not be able to hold them if the security situation spirals out of control.

Votel, however, said there were no indications that the SDF would release them.

“They recognize the importance of this … and they have recognized what it would mean if they were (let) loose,” he said.

SEE ALSO: CENTCOM Commander Gen. Votel: 'I Was Not Consulted' On Trump's Decision To Leave Syria