A petty officer currently stationed at Dutch Harbor, Alaska, is the first Coast Guardsman since 2012 to be awarded the prestigious Coast Guard Medal for heroism 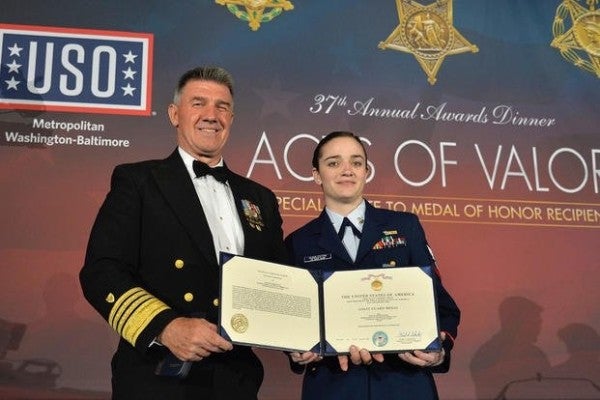 Editor's Note: This article by Amy Bushatz originally appeared on Military.com, a leading source of news for the military and veteran community.

A petty officer currently stationed at Dutch Harbor, Alaska, is the first Coast Guardsman since 2012 to be awarded the prestigious Coast Guard Medal for heroism.

Given to military members serving with the Coast Guard for heroism in a situation not involving contact with the enemy, the medal was presented to Petty Officer 2nd Class Traci Huddleston for her “extraordinary heroism” during the mass shooting in Las Vegas on Oct. 1, 2017. Coast Guard Commandant Adm. Karl Schultz presented it Tuesday during a ceremony at the annual USO Metro Gala in Washington, D.C.

Huddleston described her actions during the shooting as being in “just the wrong place, wrong time, but also right place, right time.”

The shooting killed 58 concertgoers and injured 850 others. According to the medal citation, Huddleston disregarded her own safety to guide others to cover and then spent hours providing first aid and assisting other victims before other help arrived.

“Recognizing there was no place to take cover from the hail of gunfire raining down on the crowd, she demonstrated incredible courage and composure by immediately guiding a nearby 14-year-old to the ground, using her body to shield her from the gunfire,” according to the citation. “Without concern for her own safety, she attended to the girl's mother who was suffering from bullet wounds to her neck and body.”

Huddleston guided the girl to areas of cover between gunfire bursts, according to her citation, and ultimately guided a group of concertgoers to safety at a restaurant more than a mile away. There, she provided first aid for five hours, the citation adds.

“Petty Officer Huddleston demonstrated remarkable initiative, exceptional fortitude, and daring in spite of imminent personal danger,” the citation states. “Her courage and devotion to duty are in keeping with the highest traditions of the United States Coast Guard.”

Huddleston said she was notified about a week ago that she would receive the award during the gala.

“I still just feel in shock from everything,” she said after the ceremony. “It's an honor, for sure.”

The award was last presented in 2012, when it was given posthumously to Senior Chief Petty Officer Terrell Horne, who was killed after throwing himself in front of a shipmate to protect him from an oncoming vessel.