Why Changing The Female Marine Corps Uniform Is A Mistake

The statue of Molly Marine is displayed proudly on nearly every base Marine Corps wide. Molly Marine stands confidently with... 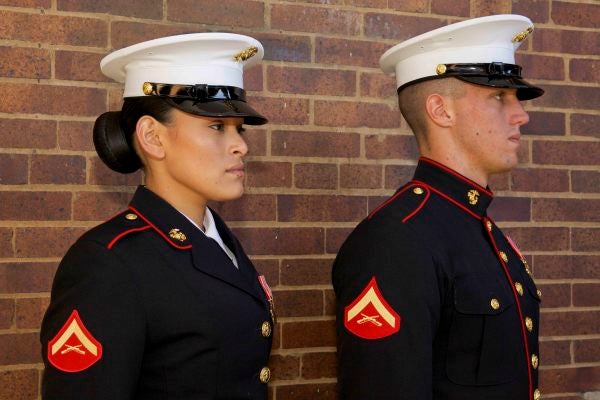 The statue of Molly Marine is displayed proudly on nearly every base Marine Corps wide. Molly Marine stands confidently with perfect posture in her traditional female Marine Corps uniform; both the epitome of service and femininity. Her knee-length skirt and tailored service coat professionally adorn her fit figure as she represents 96 years of women serving as United States Marines.

The initiative to change the uniform is wrought with gender bias, and in essence tells female Marines that only through what a Marine wears in formal ceremonies will she be recognized as an equal member. The dress blue coat currently worn by women is identifiable as a Marine uniform to the public and proudly symbolizes not just women's achievements on the field of battle, but also the long road to equality attained by women through integration and opportunity. As the country recognizes the clear and positive impact that women have made on the battlefields of Iraq and Afghanistan, where they have fought and bled alongside their brothers, so too should the Marine Corps recognize the female Marines' achievements in a dress uniform that is gender appropriate and respectful of physiological gender differences.

According to Cabaniss, who was quoted in a May 2014 Marine Corps press release, the implementation of one dress blues coat will provide “female Marines the opportunity to wear the most identifiable uniform in the Marine Corps…” and will “recognize their significant achievements on the battlefield over the last decade plus.” This perspective is counterintuitive to the commandant’s Diversity Task Force Initiative, driven by former Commandant Gen. James Amos, and detrimental to improving gender diversity in the Marine Corps. The task force was developed to “attract, develop and retain women officers.” Further, when interviewed by Marine Corps Times on Thursday, Feb. 5, the new commandant, Gen. Joseph Dunford, stated that “did not come in with any specific uniform changes in mind.”

The message sent to the future generation of Marines by changing the female blues is that while the contributions of female Marines are invaluable, their femininity is not. Arguably, this initiative not only runs counter to the strategic focus of the diversity task force, it increases the risk of the Marine Corps potentially divesting diversity by generating a “brand” label that values one gender over the other. One gender-neutral dress blue uniform does not recognize gender differences, and therefore gender inequality. The opinion that women feel left out somehow by not wearing the most recognized Marine uniform is harmful and misplaced conjecture; making female Marines dress like men is not a step in the direction toward attracting, developing, and retaining women.

According to retired Marine Col. Mary Stremlow, author of “Free a Marine to Fight: Women Marines in World War II,” when female Marines’ uniforms were designed and fielded from 1943-1952, “ailored femininity was the goal, and by all accounts, it was achieved.” Dress blue uniforms for women, which came into wear in 1952, maintained the tailored femininity, with a figure flattering coat and A-line skirt. The current women’s dress blue uniform regulations make accommodations for feminine figures with ribbon and medal placement being based how the ribbons and medals best lie on the chest even with or above the first button.

For 96 years, female Marines have worn figure flattering uniforms; it is part of every female Marines’ heritage and identity. However, the proposed masculinized dress blue coat is narrowly cut, with inverted, triangulated tailoring for a male body — a body without curves. By making female Marines look like men, the Marine Corps is suppressing gender distinctions and concealing women within the rank and file. Whether at the Marine Corps Barracks, at a recruiting event, or happenstance, when the public sees Marines in uniform they should be able to distinguish that there are women in the ranks.

In addition is the financial burden of changing the Marine Corps dress blue uniform. Not only do female Marine officers have to purchase new covers by 2015 for $76-85, they would have to spend considerable money on new dress blue coats and the accompanying tailoring if the Marine Corps forced this uniform change. For most Marines, dress blues only have to be purchased once in a career due mostly to the infrequent wear of the dress blue uniform. The dress blue coat with tailoring can cost anywhere from $415 to $440, according to The Marine Shop. While enlisted Marines are issued uniform items, Marine officers are not. This uniform change, therefore, projects a discriminating effect, forcing female Marine officers to commit to additional expenses that males do not have to endure just because of gender.

Further, according to the deputy assistant chief of staff for Marine Corps Recruiting Command advertising, Daniel J. Weidensaul, the cost of updating all collateral recruiting material caused by a uniform change is no less than $500,000. Combined with the annual $550,000 spent on regenerating current recruiting materials and $1.1 million in printing and production, the total advertising cost of changing the female dress blue uniform would be at least $2.1 million.

Beyond the costs associated with design and test, the Marine Corps would incur manufacturing costs to supply the roughly 20,000 women in uniform. Additionally, procurement costs are multiplied by the loss in resources already spent by the Marine Corps and contractors to supply the current dress blue uniform. Initial tailoring costs of approximately 20% of the base costs would be required to account for the variations in women’s bust, waist, and hip sizes. This is clearly articulated in a memo dated Feb. 26, 2013, to the president of the Permanent Marine Corps Uniform Board, prepared by Mary Boyt Shapleigh. The memo also states that this proposed change was considered in 2006, and rejected, as a survey of 1,835 female Marines opposed the idea, stating the uniform was too masculine. More bluntly, it notes, “While assignment and career opportunities for female Marines have greatly expanded, the female physiology itself has not changed.” Because of the variations and degree of physiological changes in the female body over time, alteration costs would inevitably multiply with the proposed change to the dress blue uniform.

It is also significant to point out that unlike planning at all levels where Marines begin with identifying the problem, here, there is no existing problem. Female Marines are not requesting a uniform change. Likewise, there is no vendor or supply shortage forcing the proposed change. The Marine Corps is not losing its vendor or designer for the female dress blue uniform because the same vendor would continue to be used. Rather, change itself seems to be the driving purpose of this proposal. There is no identified uniform deficiency, no requirement, and no clear proposed improvement.

Those in favor of the change felt this way for reasons such as women should wear the most-recognized Marine Corps uniform, women should be equal to men in all things, even in uniform, and women will feel more accepted in the same uniform. Of note, women have never worn the high-collar dress blue coat — it is not the most recognized uniform for female Marines. Lastly, women Marines have already achieved acceptance within the Marine Corps through our shared service and sacrifice; to opine otherwise is simply baseless.

Changing the uniform that female Marines have worn since 1952 in favor of the high-collar coat is a step in the wrong direction with foreseeable negative consequences. The proposed change devalues diversity, suppresses gender differences, conceals the female identity, distances women Marines from their service heritage, and causes unnecessary and excessive costs in procurement, tailoring, logistics, and advertising.

As the Marine Corps-wide survey is open until Feb. 27, 2015, hopefully this position is realized and the voices of the Corps will influence a decision to retain the current female dress blue uniform without change.