When a brigade of U.S. troops was ambushed by the North Vietnamese Army in the Song Tra Cau riverbed on the morning of May 15, 1967, Lt. Charles Kettles volunteered to lead the rescue, and he refused, again and again, to back down when faced with a barrage of gunfire 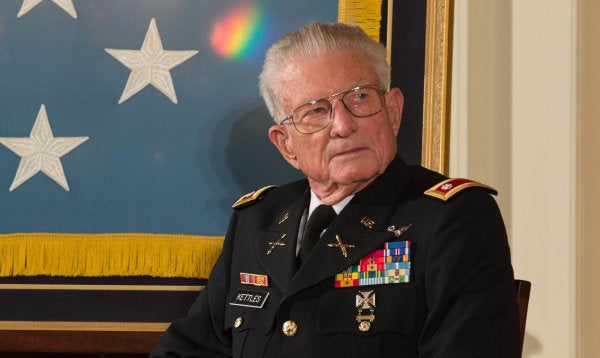 YPSILANTI, MI – When a brigade of U.S. troops was ambushed by the North Vietnamese Army in the Song Tra Cau riverbed on the morning of May 15, 1967, Lt. Charles Kettles volunteered to lead the rescue, and he refused, again and again, to back down when faced with a barrage of gunfire.

His aircraft badly damaged, left spilling fuel, and his gunner was severely injured during the treacherous operation.

But he helicoptered in and out of the battlefield four times, saving the lives of 44 soldiers in a death-defying emergency operation that would become a legendary tale of bravery in the Vietnam War.

Kettles was humble when he remembered what that day meant to him.

“Out of all of that, there is really only one thing that means anything – those 40 names are not on the wall in (Washington) D.C.,” Kettles said during a Veterans Day speech at Concordia University in 2017, a year after having the Medal of Honor placed around his neck by President Barack Obama in the East Room of the White House.

“Awards are nice, but there is far more gratitude in simply knowing that.”

It took an act of Congress to waive a rule stipulating the Medal of Honor, the nation's highest military honor, be awarded within five years of the heroic act.

“LTC Charles Kettles exemplified the best of American values – courage, dedication, and selflessness,” U.S. Rep. Debbie Dingell said in a statement Tuesday. “He went above and beyond the call of duty to save the lives of his fellow soldiers, and it was a true honor to ensure he was properly honored as one of our nation's bravest heroes.”

Enemy fire inflicted heavy damage to the helicopters in the landing zone, but Kettles refused to depart until all reinforcements were off-loaded and wounded personnel were on board.

Kettles led them out of the battle area and and then returned with more reinforcements, knowing intense enemy fire was awaiting his arrival. He landed in the middle of enemy mortar and automatic weapons fire that wounded his gunner and damaged his helicopter, military records show.

Another helicopter crew notified him that fuel was streaming out of his aircraft. Still, he nursed the damaged helicopter back to base.

Later, an emergency extraction of the remaining 44 troops was ordered. Among them were four members of Kettles' own unit, left behind when their helicopter was destroyed.

Kettles again volunteered to return to the deadly landing zone for a third time, leading six evacuation helicopters back in and out of the battlefield.

And he wasn't done yet.

A squad of eight stranded soldiers pinned down by enemy fire had been unable to reach the evacuation helicopters. So Kettles turned his helicopter around and returned a fourth time, without additional aerial support, to rescue the remaining troops.

Sgt. Dewey Smith was one of the soldiers left behind who Kettles saved. In a witness statement submitted to the military, he recounted how all his men were wounded in the fight, and they were under “intense” enemy fire as they tried to evacuate the battlefield.

“We realized there were still eight of us on the ground and there were no more helicopters. We all figured we were done for, when at the end of the valley we saw one lone helicopter headed our way… There were so many tracers climbing towards that helicopter that we figured the pilot would abort the landing,” he wrote.

“I am convinced that had it not been for the bravery and action of Maj. Kettles on May 15, 1967, I wouldn't be alive today.”

During Kettles' Medal of Honor ceremony, Obama called him the quintessential American, acting selflessly to save the lives of his fellow soldiers.

“In a lot of ways, Chuck is America,” Obama said. “To the dozens of American soldiers that he saved in Vietnam half a century ago, Chuck is the reason that they lived and came home and had children and grandchildren. Entire family trees – made possible by the actions of this one man.”

While attending the Edison Institute High School in Dearborn, he honed his love of flying on the Ford Motor Company Flight Department simulator. Following high school graduation, he enrolled in Michigan State Normal College (now Eastern Michigan University), where he studied engineering. Two years later, he was drafted to the Army at age 21.

Kettles served active duty tours in Korea, Japan and Thailand before returning in 1956 and establishing a Ford Dealership in Dewitt, with his brother.

He answered the call to serve again in 1963, when the U.S. was engaged in the Vietnam War and needed pilots. Kettles was assigned as a flight commander with the 176th Assault Helicopter Company, 14th Combat Aviation Battalion, and deployed to Vietnam from February through November 1967, according to military records. His second tour of duty in Vietnam lasted from October 1969, through October 1970.

After receiving the Medal of Honor, Kettles was honored with a number of other distinctions. He received an honorary Doctor of Public Service degree from EMU, where he previously earned his degree. EMU also named its Military and Veterans Service Center in Kettles' honor in 2016.

“His actions during combat were extraordinary, and his career stands as a shining example of all that we appreciate and honor in our veterans and those serving now,” said Michael Wise, assistant director of Military and Veterans Affairs at EMU. “The Kettles name connotes excellence and commitment, aspects we strive for in our programs and initiatives to benefit veterans who attend Eastern.”

WATCH NEXT: Charles Kettles Receives The Medal Of Honor