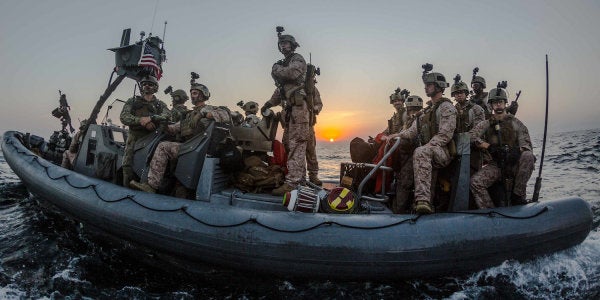 The Marine Corps’ new ad campaign takes viewers on a journey through everything the Corps stands for — from victory on the battlefield to citizenship and service at home. Called “Battles Won,” the campaign features three 30-second video spots and one 60-second ad depicting Marines drilling at boot camp, participating in the Toys for Tots program, and, in a briefly shown news clip, stopping a gas station robbery.

“We develop quality citizens who keep our corps, our country and our communities side-by-side on the winning side,” a voiceover intones. “Not for glory, but for honor.”

The campaign comes as the Marine Corps weathers a barrage of negative press and congressional inquiry attached to Marines United, a Facebook page through which active-duty troops apparently distributed nude and compromising photos of female troops. A Marine Corps Recruiting Command spokesman, Gunnery Sgt. Justin Kronenberg, said the timing of the ads’ release was not related to the recent scandal.

“The development of the brand idea was years in the making and its supporting advertising products took months to complete,” he said in a statement provided to Military.com. “We decided in December to time the release with March Madness. Media buys were placed well in advance of the launch, uninfluenced by recent news.”

The “Battles Won” concept is designed to showcase who the Marines are and what they do, Kronenberg said.

“It is an all-encompassing brand idea that frames the chapters of our longer Marine Corps story in the context of a fight–fighting self-doubt to become a Marine; fighting our Nation’s battles; and fighting for what’s right in our communities.”

While Marine Corps Recruiting Command officials have indicated they may shelve the Marines’ iconic slogan “The Few, The Proud,” in order to find a tagline that more fully expresses what the Corps does and why it exists, “Battles Won,” is not that tagline, Kronenberg said. On the new ads, the old slogan still appears under the Marine Corps logo.

In the near future, the Corps will release additional materials, including television public service announcements, radio and billboard ads, and three additional television ads.

In one billboard-style ad, Marines in dress blue uniforms stand in formation.

“The fighting spirit of an entire nation,” the text reads.

The target audience of the new materials is the youthful recruitable population as well as their influencers, including parents, teachers, coaches, and other mentors and community leaders, officials said.

“The new campaign is intended to inform and inspire America’s youth and their influencers with compelling content conveying the Marine Corps’ story of making marines, winning our nation’s battles, and developing quality citizens – framing each element as a fight–fights we intend to win,” Caldwell said.