No one was injured when a man fired an assault rifle at a Veterans Affairs hospital on the Near West Side Monday afternoon, then ran inside where he was arrested near a pharmacy as staff and patients yelled and scattered for cover 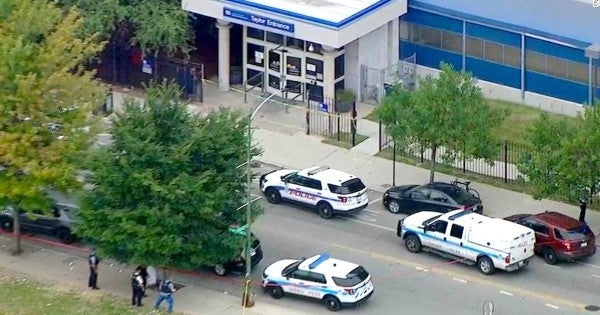 No one was injured when a man fired an assault rifle at a Veterans Affairs hospital on the Near West Side Monday afternoon, then ran inside where he was arrested near a pharmacy as staff and patients yelled and scattered for cover, according to Chicago police.

The gunman fired shots inside and outside the Jesse Brown VA Medical Center at 820 S. Damen Ave. in Chicago around 2:40 p.m., authorities said during a news conference outside the medical center.

The gunman was apprehended by Veterans Affairs police officers who responded less than 30 seconds after he entered the building, according to Jeffrey Sallet, special agent in charge of the FBI's Chicago office. The man was armed with what Sallet called an assault rifle.

“We avoided tragedy here in the city of Chicago today,” Sallet told reporters. Nine months ago, a shooting at Mercy Hospital & Medical Center left four people, including the gunman, dead.

Authorities wouldn't disclose the gunman's motive or say how many shots he fired, but medical center's acting director, Lori Lohar, didn't believe the gunman was a veteran.

“He walked up and started shooting at the building,” one witness told reporters. He appeared to be reloading when “a car tried to hit him” and he ducked into the hospital, the witness said.

Another witness, Oliver Robinson, said he briefly spoke with the gunman inside.

“I walked toward the pharmacy area and a gentleman came walking past me with that big gun,” Robinson told reporters. “He was like as close as you are to me. I said, 'Hey man, you don't have to go through that, put that down.' And at that time the VA police came around.”

Robinson said the gunman was talking about someone who had hit him.

Darryl Jones, 71, said he was inside the clinic's cafeteria when he saw the gunman walk by. “I thought, this guy is coming to try and do some damage,” he said.

Jones said people were running and screaming when they realized a man with a gun was in the center. “I was nervous,” he said.

Army veteran Aaron Cannon Jr., 74, said he was sitting in a building nearby when he heard a few gunshots ring out. “Then a whole bunch of chaos broke out, ” he said. People started running, Cannon said, and he fled to the men's restroom. “I was trying to get out the way. I didn't want to be in the line of fire. I already experienced that.”

The grounds around the hospital were crowded with people after the incident, including doctors and nurses in blue scrubs. Police kept watch at the entrance, barring anyone from entering or exiting.

Officers directed traffic around the congested area, which is also home to Stroger Hospital and the University of Illinois at Chicago's medical school.

In 2009, a man walked into the emergency room of the medical center and fired a shot into the ceiling, then pointed the gun at his head. The gunshot triggered a standoff with police, who negotiated through the door of an exam room before Kermit Washington surrendered.

Police said Washington, 53, had killed his parents before he entered the medical center.

Sallet lauded the officers on the scene for their quick response and averting a possible tragedy. “As those shots were fired and the call came, they ran to those shots resulting in a quick mitigation of the threat,” he said.