China is developing a lot of new and advanced weaponry, but a recent state media report suggests the Chinese military may not be entirely sure what to do with these new combat systems. 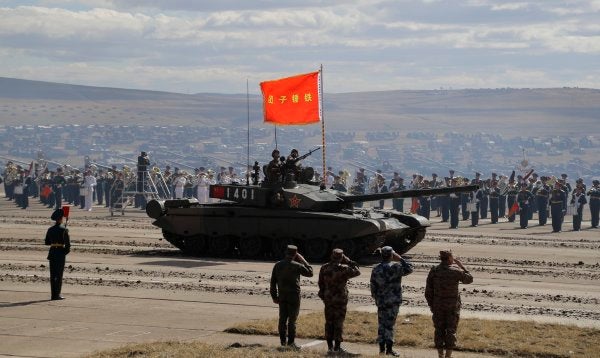 China is developing a lot of new and advanced weaponry, but a recent state media report suggests the Chinese military may not be entirely sure what to do with these new combat systems.

China is “on the verge of fielding some of the most modern weapon systems in the world,” Director of the Defense Intelligence Agency (DIA) Lt. Gen. Robert Ashley explained in a recent assessment of China's military power.

“In some areas, it already leads the world,” he added.

While the DIA assessment called attention to China's advancements in anti-satellite capabilities, precision strike tools, or hypersonic weapons, China appears particularly proud of achievements like the Type 099A battle tank, the J-20 stealth fighter, and the Type 055 guided-missile destroyer, arms which advance the warfighting capabilities of China's army, air force, and navy respectively.

But the Chinese military is apparently still trying to figure out what these developments mean for modern warfare.

In the interview with CCTV, two senior officers reflected on why Chinese troops armed with the new tanks lost in last year's simulated battle.

“We rushed with the Type 099A too close to the frontline, which did not optimize the use of the tank's combat capability,” Xu Chengbiao, a battalion commander, explained. “We only studied the capabilities of older tanks, but have not completely understood new ones,” Zhao Jianxin, a second battalion commander, reportedly told CCTV.

David Axe, a defense editor at The National Interest, argued that the Chinese media report indicates that China struggles with “inadequate” military doctrine due to the country's lack of combat experience. The Chinese military has not fought a war since the late 1970s.

China is focusing more on the navy, air force, rocket force, and strategic support force than it is on the army, which his experienced a major reduction in personnel. This shift, according to some analysts, highlights an interest in power projection over home defense.

As the warfighting capabilities of the Chinese military grow, it will presumably need to adapt its military doctrine to emerging technologies to maximize capability, but that process may take some time.

The Chinese military is undergoing a massive modernization overhaul in hopes of achieving Chinese President Xi Jinping's stated goal of building a world-class military that can fight and win wars by the middle of this century.

WATCH NEXT: The US Military May Face A Huge Logistics Problem In A Future War With China Or Russia

~popular_source-pageview
How The Other Half Fights